SPOILER ALERT: The following blog entry may reveal details you'd prefer not to read about MURDER ON THE ORIENT EXPRESS by Agatha Christie; THE COMPLETE HISTORY OF WHY I HATE HER by Jennifer Richard Jacobson; BOY TOY by Barry Lyga; last night's episode of TOP CHEF; and movies such as THE GLADIATOR, ALL ABOUT EVE...and about a zillion Lifetime network flicks.

Many years ago, when I was a teenager, a group of us went to see the movie version of Agatha Christie's MURDER ON THE ORIENT EXPRESS.

An older girl in the neighborhood said, "Oh I just saw it. It's really good!"

We figured she was joking. But a couple hours later we were sitting in the theatre watching Hercule Poirot figure out that **** *** did it!

I've been thinking about these types of "spoilers" because of two incidents that happened yesterday.

First, a friend sent me an e-mail in which the conversation segued unexpectedly to the Russell Crowe film THE GLADIATOR. My friend wrote:

I don’t know if you’ve seen it, but it’s about a man who offends the new Roman emperor, and therefore is targeted for assassination. The problem is, he escapes his attackers and returns home where he finds that his wife and child have been murdered by agents of the new emperor. He survives and ultimately gets his revenge, but **** in the process.

Russell Crowe **** in THE GLADIATOR? I didn't know that. Granted, the movie is about ten years old. I'd had the opportunity to see it at the theatre back then. Or rent it from Blockbuster. Heck, by now it's even been on TV a few times. Yet somehow I'd never gotten around to watching it. But I always figured that I'd see it someday. Except now the ending has been spoiled.

Later that day I picked up a new book by Jennifer Richard Jacobson called THE COMPLETE STORY OF WHY I HATE HER. I didn't know much about the novel but, based on the cover illustration, figured it was about conjoined twins: 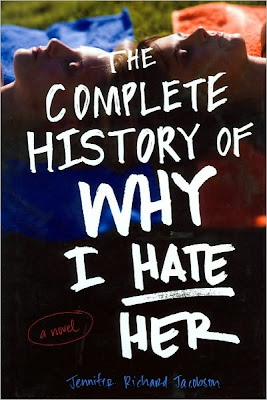 Kidding. I knew it wasn't about twins. But having enjoyed the author's first novel, STAINED, I was anxious to read this one. Plus it had that wonderfully intriguing title. (WHO does the narrator hate? And why?) The description on the front flap of the dustjacket was deliberately vague. It begins by describing a scene from the novel, set on a ledge over the Atlantic Ocean, then asks "How did any of them get here, to this place of beautiful danger?" The flap goes on to tell us more about the protagonist, ending with, "Nola's story of her expectations, of losing and finding her true self, is as unpredictable as ocean weather. Like being seventeen."

Hmm, very intriguing. I began reading the novel last evening, following Nola from the bus depot where she leaves her cancer-stricken younger sister, to the resort in Maine, where she will work as a waitress for the summer. Along the way she meets an extroverted new friend named Carly. At page 61, I set the book down, eager to return to the story later that night. Unfortunately, I set the volume frontside-down and found myself looking at something I hadn't noticed before -- a blurb from author Nancy Werlin on the back cover:

An elegantly written and brutally realistic horror novel about a teenage girl's worst nightmare. Jacobson is spot-on with *****'s insidious terror campaign against ****.

And I wish I hadn't noticed that blurb until after I'd finished the book.

Whenever I'm discussing a book or movie, I consciously try to avoid spoilers if possible. Heck, in this age of VCRs and DVRs, I'm even careful to provide spoiler alerts when discussing last night's TV shows with friends via e-mail. (Our notes are filled with statements like "In case you still haven't watched the conclusion of THE NEXT FOOD NETWORK STAR, I'll just say that I was satisfied with how it ended" or I'll write the words "SPOILER ALERT!" in a large font before continuing, "Did you watch TOP CHEF last night? At last Alex finally paid for the pea puree incident!")

But sometimes I wonder if I'm too sensitive about spoilers.

Let's face it: don't the majority of movie trailers show us all the best scenes before the film is even released?

Don't a lot of book reviews reveal way too much?

And don't the front flaps or back covers of most novels give away much of their plots?

Sometimes the publisher tries to be a little enigmatic, as in this front flap copy from Barry Lyga's BOY TOY:

Josh Mendel has a secret. Unfortunately, everyone knows what it is.

Five years ago Josh’s life changed. Drastically. And everyone in his school, his town -- seems like the world -- thinks they understand. But they don’t – they can’t.

And now, about to graduate from high school, Josh is still trying to sort through pieces. First there’s Rachel, the girl he thought he’d lost years ago. She’s back, and she’s determined to be part of his life, whether he wants her there or not.

Then there are college decisions to make, and the toughest baseball game of his life coming up, and a coach who won’t stop pushing Josh all the way to the brink.

And then there’s Eve. Her return brings with it all the memories of Josh’s past. It’s time for Josh to face the truth about what happened.

If only he knew what the truth was... 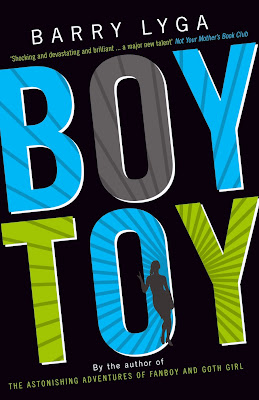 Great. That's cryptic enough to keep readers interested, yet not give away the plot.

But then you turn a couple pages into the book and there's the CIP (Cataloging in Publication) info right there on the copyright page, not only providing plot details:

After five years of fighting his way past flickers of memory about the teacher who molested him and the incident that brought the crime to light, eighteen-year-old Josh gets help in coping with his molestor's release from prison when he finally tells his best friends the whole truth.

but the Library of Congress' subject heading for the book ("Sexual abuse victim -- Fiction") as well.

Maybe in the long run it doesn't matter. Though I prefer to read my novels "spoiler free," in truth I still went ahead and read BOY TOY after learning what the mystery was. I'm going to go ahead and finish THE COMPLETE HISTORY OF WHY I HATE HER, of course -- and I would have even if the plot device was emblazoned on the front flap, back flap, and front cover. I've always like the kinds of books where a "friend" steals into someone else's life -- from Charles P. Crawford's BAD FALL to Adele Griffin's AMANDINE to movies like ALL ABOUT EVE and all those zillions of Lifetime flicks with the same plot device.

Because as much fun as it is to be surprised by WHAT happens in a book, the real pleasure is often in learning the WHO and WHY and HOW that makes each story unique.

Having said that, I think I'm going to keep off the internet next week till I finish reading MOCKINGJAY. I sure don't want some blogger or listserve reviewer telling how this trilogy ends before I read it myself.

I just hate when that happens!
Posted by Peter D. Sieruta at 9:57 AM

It wasn't your fault; the publisher chose to "spoil" the book on the back cover.

In retrospect, my blog probably should have included a general comment about the use of blurbs from well-known authors. When I see that you (or any other author I admire) liked a book enough to provide a positive quote, my interest in the novel is definitely picqued -- so ulimately your blurb helps draw readers much more than it "hurts."

P.S. Maybe you should let your husband read MOCKINGJAY before you do. (Smile.)

I'm almost the opposite; if I get too caught up in a plot, I'll skip to the end to see what happens. Although probably the cardinal sin of booklovers everywhere, this has allowed me to get a proper night's sleep time and time again.
I can deal with spoilers in books, but hate them in movies. After all, a movie takes just two hours or so, and I can stand the suspense for that long.

I'm with Lin. I almost always read the end so I can relax and really enjoy the story and the writing.