Stars in My Eyes

A good friend recently gave me this book as a present: 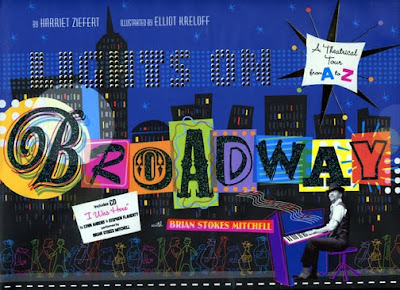 LIGHTS ON BROADWAY : A THEATRICAL TOUR FROM A TO Z was written by picture-book stalwart Harriet Ziefert and illustrated by Elliot Kreloff. Tony-winning actor Brian Stokes Mitchell wrote the introduction.

I was especially thrilled to discover my copy was personally inscribed by both Brian Stokes Mitchell and Elliot Kreloff: 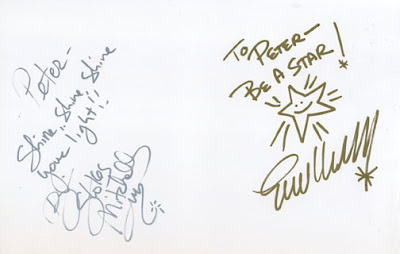 This oversized ABC contains splashy color illustrations that capture the energy and excitement of the Great White Way, overlaid with text blocks that define show biz terms (“A is for Audition and Actor and Audience and Applause...B is for Broadway and Break a Leg! and Box Office....”) and offer quotes from Broadway legends (“I knew very young that I had a Broadway voice too. At 15 years, I knew I’d be on the Broadway stage. I knew I had a place on the Broadway stage” -- Patti Lupone.)

Though I love looking at this book, I also question its intended audience. Responding to a recent blog entry, "sdn" -- a noted children’s book editor -- said, “The best test, I find, is to ask oneself: ‘to whom would I give this book?’” In the case of LIGHTS ON BROADWAY, I'm not sure of the answer. Amazon.com lists it for ages 4-8, but I’ve got to wonder how many young kids -- outside of those who live in NYC and began seeing Broadway matinees while still in Pampers -- have any interest in the theater. How many have even heard of Brian Stokes Mitchell, much less Carol Channing, Harvey Fierstein, Billy Crudup or Arnie Burton. (Heck, even I’ve never heard of him!)

Would I have liked this book as a child? I doubt it.

But I think I would have grown to appreciate it as I got older and became fascinated with theater. Starting in my teens, I began attending as many local high school plays as I could; I became familiar with the canon of famous American musicals not be visiting Broadway, but by seeing shows like OKLAHOMA, CAROUSEL, BYE-BYE BIRDIE (more times than I can count), WEST SIDE STORY and others in stuffy high school auditoriums and gymnasiums. It never even crossed my mind that I could -- or ever would -- venture to New York and see a show on Broadway myself. It seemed like a foreign land to a midwestern kid like me. When I heard that a former student at our high school named Zora Rasmussen had actually moved to New York and become a professional actress, I looked her up in an old yearbook. I figured she must have been a very special person -- different from all the other students at our school -- to leave workaday Detroit and head for the lights of Broadway.

Then, a couple summers after graduating high school -- and through a series of strange circumstances and coincidences -- my brother and I had the opportunity to visit New York City for the first time. The night before we left, we took our parents to see a new movie playing at the local mall. A LITTLE ROMANCE was a cute love story which starred an aged Laurence Oliver (years after WUTHERING HEIGHTS and HAMLET) and a very young Diane Lane (years before LONESOME DOVE and UNFAITHFUL) -- but we all thought the movie was stolen by a young actress named Ashby Semple who, in the role of Diane's best friend, provided comic relief with her wide-eyed exclamations of shock at every twist in the plot.

The next day we boarded a flight for LaGuardia and -- from the moment the plane banked over the Statue of Liberty shining in the morning sun -- we began our own "little romance" with the city of New York. During the coming week we did all the touristy things by day -- the Empire State Building, Ellis Island, the World Trade Center -- and at night we saw our first Broadway shows: SWEENEY TODD, THEY'RE PLAYING OUR SONG, THE ELEPHANT MAN....

By the end of the week, New York no longer felt foreign and Broadway was no longer something I only dreamed about. It felt like a home away from home.

The following Sunday we arrived back home and our parents met us at the airline gate. After a week of bustling crowds, ear-splitting noise, and constant excitment, Detroit's airline terminal seemed nearly empty, deadly quiet, and strangely dull. Still, we were excited to tell our folks about all the sites we'd visited and the plays that we'd seen. We hauled out our Playbills to show them the autographs we'd gotten after the shows.

My mother said, "You can get autographs here in Detroit too, you know."

"From who?" I scoffed. "There's nobody famous around here."

My mother then reached in her pocket and handed us this piece of paper: 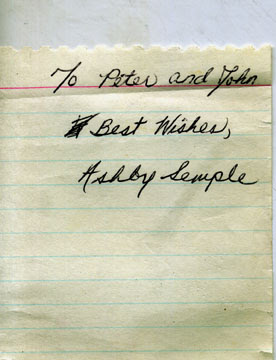 "Ash--? That little girl from A LITTLE ROMANCE? What?"

Turns out that, as my parents were waiting for our flight to arrive, they'd noticed a teenage girl and an elderly man walking through the empty terminal. They immediately recognized her as the young actress from the movie we'd all just seen. So they stopped and said, "Aren't you...?" and she was. She was here in Detroit visiting her grandfather -- the old man who was walking with her through the airport. My parents told her how much we enjoyed her performance and asked if she'd sign an autograph for my brother and me. How much do I love that autograph, torn from a lined spiral notebook? I especially like how she carefully crossed out her mistake as she wrote it out. It gives the autograph distinction and character. And I still think it was weird and funny and cool that, while my brother and I were chasing all over Broadway getting autographs from stars, my parent met an actress right in our backyard. "Anything can happen if you keep your eyes open," said our father.

That was thirty years ago last summer. Since then, New York may have lost its mystique for me (it no longer feels like a foreign land) but it sure hasn't lost its magic. For many years I held onto a demanding second job, just so I could afford to visit New York once or twice a year. I'd take the overnight train and stay for three nights (three nights = five Broadway plays) or sometimes even five nights (which equals EIGHT Broadway plays!)

New York still feels like my home away from home.

People have asked if I'd ever consider living there permanently.

I think the city might actually lose its magic if I lived there full-time.

For one thing, I could never afford it. If I lived there full-time, I'd spend my days working, just like I do here in Detroit. Evenings wouldn't be a whirlwind of eating out and walking through the brightly-lit streets and seeing Broadway plays. I'd spend my evenings as I do here -- washing clothes, reading, watching the Biggest Loser on TV, surfing the internet, dozing off in my chair.

What makes New York so special is that it remains a vacation from my regular workaday world -- something I only get to experience once in a while.

...Actually, it has been a while since I last visited New York. Which is one of the reasons I so appreciate that picture-book-that's-not-really-for-kids, LIGHTS ON BROADWAY. When I flip through the volume, I'm back in Times Square, surrounding by theaters and it's nearly curtain time.

And tucked in the pages of LIGHTS ON BROADWAY I keep our autograph from Ashby Semple as a reminder that there’s magic here in Detroit too, if you just keep your eyes open.
Posted by Peter D. Sieruta at 9:51 AM

I remember that girl! Her character's name was Natalie. I remember she was trying to speak French to Diane Lane's little boyfriend and he said, "I speak English; don't strain yourself."

I also would question the audience for this book, but definitely see the pull it would have for those of us that once had dreams of Broadway.

Enjoyed your post, bought back my own memories of theater productions. I would have loved this book being totally enamored by acting by age five.