Not much to share in today’s blog, but here are a few news items and opinion pieces, presented Sunday Brunch style.

A couple weeks ago I received in the mail a large packet of information about the Astrid Lindgren Memorial Award. Called “the world’s largest prize for children’s and young adult literature,” the $620,000 award can be given to one person or shared among several, and the candidates include not just children’s authors and illustrators, but also oral storytellers and promotors of reading.

I wouldn’t even know who to pick among that dozen -- not to mention the other 150+ on the list!

Earlier this week the 2010 Astrid Lindgren Memorial Award was given to Belgian illustrator and writer Kitty Crowther. I have to admit I am unfamiliar with her work, most of which has been published in French and Dutch. I did see one reference to a book published in Engish, JACK AND JIM, in 2000. 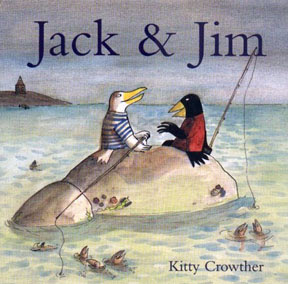 It will be interesting to see if more of her books appear in the U.S. now that she’s won this award.

Incidentally, the Astrid Lindgren Memorial Award has only been around since 2002. The previous winners were:

One of the things I find most interesting about this award is that it was founded by the Swedish government. The promotional packet I received referred to it as “an award by the Swedish people to the world.”

When I looked up those previous Astrid Lindgren winners on Wikipedia, I was surprised to see Sonya Hartnett among the previous winners. I would never have put her in the same category as, for instance, Maurice Sendak and Katherine Paterson. Personally, I can’t say I really like her books, but they are often interesting. Anyway, I clicked on the link to her name and discovered an intriguing anecdote I knew nothing about. According to Wikipedia:

In 2006, Hartnett was involved with some controversy regarding the publication of LANDSCAPE WITH ANIMALS, published under the pseudonym Cameron S. Redfern. The book contains many sex scenes and Hartnett was almost immediately "outed" as the author. She said that she wanted to avoid the book being accidentally shelved with her work for children in libraries and denied that she used a pseudonym to evade responsibility for the work or as a publicity stunt.... In a review published in THE AGE, Peter Craven savaged the book describing it as an "overblown little sex shocker", a "tawdry little crotch tickler" and lamented that Hartnett was "too good a writer to put her name to this indigestible hairball of spunk and spite". It was defended vigorously in the THE AUSTRALIAN by Marion Halligan ("I haven't read many books by Hartnett, but I think this is a much more amazing piece of writing than any of them") who chastised Craven for missing the joke ("How could an experienced critic get that so wrong?") and wonders why female authors writing frankly about sex is so frowned upon.

Hmm...it might be interesting to track down a copy of this novel!

This past week also brought the announcement of the Hans Christian Andersen Award winners. This international prize is given every two years to honor the complete works of both an author and an illustrator.

This year’s award for illustration went to Germany’s Jutta Bauer.

The award for writing went to David Almond of the United Kingdom.

This year’s nominees from the United States were Walter Dean Myers for writing and Eric Carle for illustration.

“The sun sets in the west (just about everyone knows that)....”

The famous opening lines of Ellen Raskin’s Newbery winning THE WESTING GAME may have to be rewritten to say:

because it appears that there is a sequel to THE WESTING GAME on the horizon.

In January 2007, Publishers Weekly announced that Dutton had purchased from Ellen Raskin’s estate “two new puzzle mystery novels: THE WESTING QUEST, a sequel to THE WESTING GAME, and A MURDER FOR MACARONI AND CHEESE, a never-before-seen manuscript nearly completed at the author's death in 1984.”

Since then I have not heard much about these books. I still don’t know when the WESTING GAME sequel will be published (and how much of it is really based on Ms. Raskin’s own ideas) but it appears that a novel titled THE CASE OF MACARONI AND CHEESE "by Ellen Raskin with help from Daniel Ehrenhaft" will be published this fall.

I’ll be very curious to read this one. If the book was “nearly completed” in 1984, why did it take over a quarter century for it to see publication? I guess that’s yet another mystery!


AUTHOR ON THE RADIO

Seems like wherever I go, whatever I do, I stumble onto something involving children’s books.

This afternoon I ran out to the store and, scanning through the radio dial, came across a show called “Good Parenting with Matt Bubala.” And just when I stopped to listen, he announced that his next guest would be Mary Pope Osborne, author of the “Magic Tree House” series.

When was the last time you heard a children’s author interviewed on the radio?

Ms. Osborne started off describing the plot of her latest, LEPRECHAUN IN LATE WINTER, and it was a pleasure to hear a kids’ book described in sentences, even paragraphs, instead of the kind of one-line summary used to introduce the Newbery and Caldecott winners on the Today show each year. And although I’ve never been a big fan of this series, I gained a new respect for the books when I heard the author’s obvious commitment to writing for kids and getting them to read.

I liked Matt Bubala’s attitude as well, as he discussed reading aloud with his eight year old son each evening, with Matt reading each left-hand page and his son reading each right-hand page. The only thing I didn’t like was when the host said that his son was starting to grow past the Magic Tree House and was now into the Wimpy Kid series. Yeah, the voice and attitude of the Wimpy Kid books is definitely geared for older readers...but I’m not sure they are a step up in reading. Aren’t there just a few words on each page...?

I was sorry to hear that Australian author Patricia Wrightson passed away this past week. She was a past winner of the Hans Christian Andersen Award (1986) and also received a Boston Globe-Horn Book Award for her 1983 novel A LITTLE FEAR.

I was going to end this entry with a slam-bang finish by showing you my inscribed copy of A LITTLE FEAR...which happened to be the copy that was originally owned by the Horn Book and which Ms. Wrightson signed when she came to the U.S. to accept her award.

Unfortunately, the volume is not currently on my shelves and must already be packed away in one of the dozens of boxes of books stacked behind me at this moment, waiting for my move.

Thanks for visiting Collecting Children’s Books. I plan to be back later this week with at least one weekday posting.
Posted by Peter D. Sieruta at 6:20 PM

I've just discovered your blog, and am enjoying it very much! As a fellow collector, especially of Newbery winners, I was also astounded (read: made envious) by your collection on LibraryThing. It is truly amazing. I did wonder about the LibraryThing interface, though. For some reason, despite other books being tagged with the 'Newbery Award' moniker, only 81 titles come up when I sort by that category. I realize this is geeky but I had wanted to see the whole list. Am I right that you have collected first editions of all 89 titles? And, do all those first editions listed include dust wrappers?

Finally, I wondered whether you know of any site that lists first edition points for Newbery winners (or whether you would ever compile such a list yourself).

In any case, thank you for this blog!