The Boys of Summer

Even though "Young Adult Literature" is a fairly recent genre, there has always been literature about young adults.

I'm thinking about a couple such books today -- one a novel, the other a play -- that predate the YA designation, yet fit the genre well. Both are humorous summertime romances featuring earnest young men caught up in the heart-sputtering lunacy of first love.

Published in 1916, Booth Tarkington's SEVENTEEN tells the story of midwestern teenager William Sylvanus Baxter, whose professed lack of interest in girls ("I never saw one in my life I'd care whether she lived or died!") 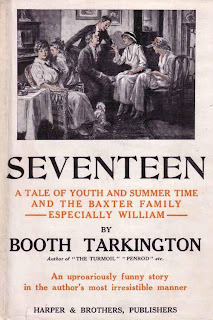 immediately dissolves when he sets eyes on Miss Lola Pratt, a beguiling town visitor who clutches her pet dog like a fashion accessory and speaks in babytalk ("Me 'fraid oo's a no'ty, no'ty ickle dirl!" Translation: "I'm afraid you're a naughty, naughty little girl.") One look at Lola and William is borrowing his father's dress-suit, buying cigarettes, and jockeying for position among Miss Pratt's myriad of suitors. Reading SEVENTEEN nearly a hundred years after it was published, it's easy to see why the book is no longer read in schools. The dialect ascribed to an African-American handyman is stereotyped and the epithets William casually uses to describe him are fairly shocking. On the other hand, the novel's humor holds up marvelously well. I found myself laughing outloud many times at Miss Pratt's babytalk (though an 'ickle of that goes a long way), at the bratty behavior of William's tattling little sister, and at the protagonist's oversized emotions, occasional priggishness, and romantic fervor -- proving that, despite many changes in society, the agonies and ecstasies of being "seventeen" remain the same throughout the ages.

SEVENTEEN reminded me of another title that explores similar themes -- AH, WILDERNESS by Eugene O'Neill. If you only know O'Neill from his somber dramas (LONG DAY'S JOURNEY INTO NIGHT; A MOON FOR THE MISBEGOTTEN), you'll be pleasantly surprised by this, his only comedy. 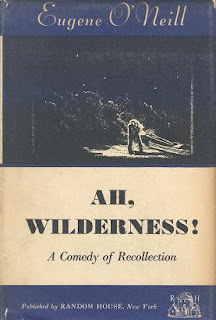 ...And if you're one of those people who doesn't like to read plays, here's a tip: just think of them as Instant Message conversations without the abbreviations and emoticons. Set over the Fourth of July holiday in 1906, AH, WILDERNESS! concerns Richard Miller, a sixteen-year-old lovestruck kid growing up in smalltown New England. Given to quoting The Rubaiyat and grandly making Important Statements About Life, Richard is so devastated when his first romance ends that he goes out with a wild older woman and has too much to drink. It may sound racy, but there is a real innocence to Richard, and the play as a whole, which is very appealing. It's also extremely funny, though the humor here is more gentle than in the Tarkington novel. Unlike SEVENTEEN, O'Neill's play continues to be enjoyed by modern audiences and was revived on Broadway as recently as 1998. And it still makes a great reading experience.

Over the years, readers of young adult books have complained there are not enough love stories for teenage boys.

Here are two that were published long before "YA Books" even existed as a genre.

But can SEVENTEEN and AH, WILDERNESS! really be classified as young adult books? I guess that depends on perspective. Although both works feature teenage protagonists, they are part of a larger canvas that also includes adult characters. Both devote many scenes to the boys' frustrated (yet very loving and sympathetic) parents; AH, WILDERNESS also includes a sad romance between two forty-somethings. Adult audiences will view William's and Richard's humorous antics with a rueful sense of nostalgia...but I think there is still enough immediacy and realism in these characterizations that contemporary teenagers will see themselves in these boys as well. Though published long ago and -- at least in the case of SEVENTEEN -- containing some politically incorrect material, the timeless emotions of first love prevent these summertime romances from ever going out of season.

SEVENTEEN : A TALE OF YOUTH AND SUMMER TIME AND THE BAXTER FAMILY ESPECIALLY WILLIAM by Booth Tarkington; illustrated by Arthur William Brown. Harper and Brothers, 1916.

SEVENTEEN -- orange cloth cover with title and author's name imprinted on both spine and front panel. "Published March 1916" and the code "B-Q" must be on the copyright page. A tissue-guard should be present between frontispiece and title page. The dustjacket (pictured above) has the title and subtitle on both the cover and spine. The price is $1.35.

AH, WILDERNESS! -- blue cloth cover with O'Neill's signature stamped in gold on front and the title in gold on the spine. "Published October 1933" on copyright page. The dustjacket (pictured above) should have a price of $2.50.

Both books are available and can usually be found for under $200 each.
Posted by Peter D. Sieruta at 9:54 AM

After reading "The Magnificent Ambersons," I'm very open to reading more Booth Tarkington. Thanks for the suggestion.

A similar book is "Meet Me in St. Louis." I don't know that it was written FOR young adults but it certainly celebrates their lives, loves and summer fun.

This March I had a tour of the JFK Presidential Birthplace which was bought back by the family decades later and restored under Rose Kennedy's direction in 1967. Fascinating in terms of her memory, her wish to memorialize her son, and more. But I write because I was completely fascinated that she arranged to have a copy of Penrod on display in her private "boudoir" --- a tiny room of the master bedroom. Have always wondered what she meant by that. I mean, Penrod isn't exactly typical boudoir reading matter.