Sunday Brunch for Mothers and Others

Today’s Sunday brunch contains the usual randomness on children’s books old and new, including a few special items for Mother’s Day. I’d also like to take this opportunity to wish any mom who’s reading this a very happy day -- especially mine. One of my mother’s favorite hobbies is finding typos, spelling mistakes, and grammatical errors in this blog. ...And she does find a LOT of them. It’s the perfect job for a mother: pointing out your mistakes but making you a better person in the process. I truely haate too thinnk how unreadible this bog wood be wihtout her kind asistance. Im very greatfull.

The Mummy Market by Nancy Brelis
The author only wrote one book -- but it’s near-perfect. Some editions are titled THE MOTHER MARKET -- probably because “mummy” misleadingly conjures up images from Ancient Egypt

Moon, Have You Met My Mother : The Collected Poems of Karla Kuskin
Over four decades of classic poetry in one classy volume.

Mama, Do You Love Me? by Barbara M. Joosse
Such a popular book that it was republished in a “Tenth Anniversary Commemorative Edition.”

A Chair for My Mother by Vera B. Williams
Caldecott Honor and Reading Rainbow favorite.

Ramona and Her Mother by Beverly Cleary
Most paperback editions of this book feature a cover illustration of Ramona making a mess with a toothpaste tube, but I’ve always loved the dustjacket from the original hardcover, which captures a quiet moment between Mrs. Quimby and an unusually contemplative Ramona.

Mom, the Wolf Man, and Me by Norma Klein
When Norma Klein decided to write her first children’s book, she vowed to complete the novel by writing ten pages a day for ten days. This book was the result.

Mama by Lee Bennett Hopkins
The well-regarded poet took a rare foray into fiction with this novel, which contains autobiographical elements.

My Mama Says There Aren't Any Zombies, Ghosts, Vampires, Creatures, Demons, Monsters, Fiends, Goblins, or Things by Judith Viorst
It took a few years, but Judith Viorst finally came up with a title even longer than ALEXANDER AND THE TERRIBLE, HORRIBLE, NO GOOD, VERY BAD DAY.

Have you ever noticed how many children’s books dealing with social issues have the words “mom” or “mother” in the title?

There are books about adoption (DID MY FIRST MOTHER LOVE ME? by Kathryn Ann Miller; WE DON’T LOOK LIKE OUR MOM AND DAD by Harriet Langsam Sobol), addiction (SOMETIMES MY MOM DRINKS TOO MUCH by Kevin Kenny and Helen Krull), divorce (MOM AND DAD DON’T LIVE TOGETHER ANYMORE by Kathy Stinson), illness (MY MOM HAS HEPATITIS C by Hedy Weinberg and Shira Shump), disability (MOM CAN’T SEE ME by Sally Hobart Alexander), and abuse (MY MOM HAS A BAD TEMPER by Beverly H. Hopkins.)

Yesterday I visited the library children’s department staffed by the woman I call Debbie, the Desperate Librarian. She was fuming because no one had signed up to attend that afternoon’s mother-daughter reading group event. I asked what novel they were supposed to discuss and it was -- get this -- ONE OF THOSE HIDEOUS BOOKS WHERE THE MOTHER DIES by Sonya Sones. I suggested that perhaps that particular novel wasn’t the best selection for Mother’s Day weekend, but Debbie disagreed, arguing that “all the best books feature motherless kids.” She then showed me some new bookmarks she’d just created on her computer.

She said kids haven’t been picking up these bookmarks -- “even though they’re free!” -- and that next time she’ll try printing them “on fluorescent-colored paper -- maybe hot pink or bright yellow -- and maybe adding some fun graphics.”

Our library recently received a copy of this year’s Caldecott Honor, A COUPLE OF BOYS HAVE THE BEST WEEK EVER by Marla Frazee. I wasn’t wild about the rather pedestrian narrative (I know, I know, the Caldecott rewards art, not writing), plus I felt the two boys looked a little too much alike, but the book did contain some nice images. I was particularly impressed by a picture of the two boys looking at the sunset, although it seemed kind of familiar. Then I remembered that Ms. Frazee had done a similar illustration for the dustjacket of Deborah Wiles’ EACH LITTLE BIRD THAT SINGS. 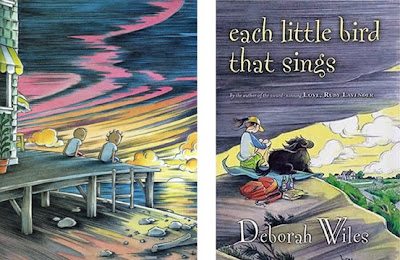 True, they’re not identical, or even too close to tell apart (like the two boys in BEST WEEK EVER) but they have similar evocative qualities and I like them both a lot.

A few months ago I wrote about how excited I was to receive a limited special edition of MY FATHER’S DRAGON by Ruth Stiles Gannett as a Christmas present. The copy I received was number 88 out of only 125 that were printed. Considering the population of the United States is over 300 Million, that means (if I’m figuring right) that only one out of 2.4 Million people own a copy of this book. WOW...that’s pretty amazing!

Now comes word that Little Brown is publishing a special limited edition of BREAKING DAWN by Stephenie Meyer. The hardcover will include a DVD containing music and interviews with the author. It will be published on August 4 and limited to...only...one million copies. Which means that only one out of 300 Americans will be able to own a copy of this book. WOW...er, wow....that’s...not so amazing.

Speaking of limited editions, a bookseller recently offered me this rare keepsake from the 1972 Newbery-Caldecott Award Banquet. It’s a mug that honors Newbery winner MRS. FRISBY AND THE RATS OF NIMH (Robert C. O’Brien) on one side and Caldecott winner ONE FINE DAY (Nonny Hogrogian) on the other. 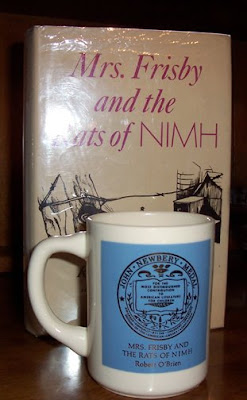 It’s too special to drink from...but looks great on display.

Wouldn’t it be exciting to have a famous children’s book writer as a mother?

I was amused to read how some kids felt about their literary moms.

Lois Duncan’s daughter once accompanied her mother to a writers’ conference. When they returned home, the daughter excitedly told her siblings: “It was unbelievable! Mother made speeches, and people took notes, just like she was somebody important. Afterward they all went crowding up to talk to her and ask questions and ask for autographs. And at dinner, everybody wanted to sit next to her!”

Duncan said her family listened to this news in “stunned silence.” Finally her son responded, “I hope you didn’t give it away. I hope you didn’t tell them that back home she’s just an ordinary mother.”

E.L. Konigsburg had a similar experience. When a teacher asked Ms. Konigsburg’s daughter “How does it feel to live with a famous mother?” her daughter replied, “Famous? My mother’s just a mother. Why, I’d never argue with anyone famous, and I argue with my mother every day!”

Finally, after winning the Newbery Award for THE SUMMER OF THE SWANS, Betsy Byars got a questionnaire in the mail from a group of students. One question was, “What do your children think of having a Newbery Award winning mother?”

I (obviously) read a lot of children’s and young adult books, but every now and then I get the urge to try something a little different. I’ll think “I haven’t read a bestseller in a year” so I’ll rush out and read a book off the New York Times list. Or I’ll decide to read another Pulitzer-prize novel and then cross it off my “Pulitzer list” (only sixty more to go.) And sometimes I’ll choose a classic novel that I haven’t read before. That’s what happened this week when I picked up a paperback copy of MIDDLEMARCH by George Eliot, a book which everyone else in the world -- but me -- has apparently read and loved. I think I was always put off by its extreme length. But now that even the slightest young adult novels are clocking in at 400+ pages, MIDDLEMARCH doesn’t look so daunting. I began reading it the other night and fell asleep twenty-six times during the introduction, but now that I’m actually reading the novel, I’m starting to like it. We’ll see if I make through all 900+ pages.

Do you feel compelled to finish every book you begin?

Or do you feel you have the right -- even the duty -- to set aside an unfulfilling book in hopes of finding something better?

I have to admit that I seldom intentionally give up on a book. Whenever I put down a partially-finished volume, I always plan to get back to it. Someday. But often someday never comes. So maybe I’m just lying to myself when I say, “I’ll get back to it eventually.”

The idea is that the older you get, the more definite you are about what you like. At age 12 you’re still developing your tastes and need at least 88 pages to get a sense of whether you appreciate a book. Plus you become more educated about literature and “what makes a good book” as you get older. Most of all, the older you get, the less time you have left to waste on mediocre or bad books.

I don’t know if I agree with this “formula” but I thought it was intriguing.

If I follow this plan, I only need to read 50 pages of MIDDLEMARCH before I decide to continue on.

My brother would have to read 52.

Let me assure you that you are on the right path with Middlemarch. Keep going and soon you won't be able to stop!

Great choices for the Ten Books with Entitled Moms. I especially love A Chair For My Mother. I've used it in family literacy classes with moms and dads, who in turn shared it with their kids. The bold illustrations are captivating and the simple story quite tender.

Happy mothers day !!!
There is lot of pictures of childrens toys.

I read 'Mrs. Frisby and the Rats of NIMH' several times when I was in elementary school, and its images have definitely stuck with me. That mug is a neat collectible!

My husband's grandmother turned 101 years old two weeks ago, and is still an avid reader (she's amazing). But by the formula, she'd only have to read . . . what, -1 pages before having to put the book down? Heh.

Oh, and I second the motion on getting clarification on whether or not Deb exists. Just thinking about a children's librarian making a "Dead Moms" booklist gives me a case of the jibblies.