This is Clyde Tombaugh. He was only 24 years old and fresh off his family's Kansas farm when he discovered the planet Pluto. 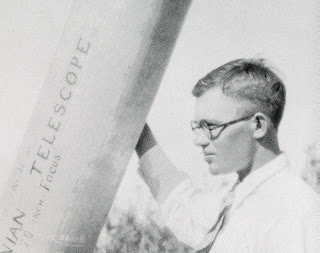 This is Venetia Burney, an eleven-year-old British schoolgirl, famous for naming another world. 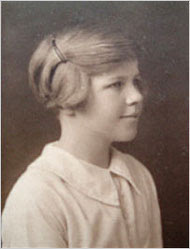 And here's Plato Chan, who was only twelve when he drew the pictures for a children's book called THE GOOD-LUCK HORSE. He became the youngest illustrator, by far, to ever receive a Caldecott Honor award. 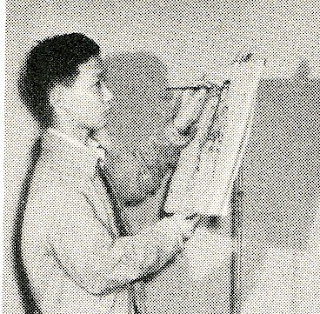 These three young people of accomplishment lived very different lives but are all connected by the events of March 13, 1930. That was the day Arizona's Lowell Observatory announced the discovery of the ninth planet in our solar system. Astronomers had long suspected that the orbit of Uranus and Neptune was affected by the pull of an even more distant, unknown body, but no one had ever been able to prove the existence of this unseen planet.

Growing up on farms in Illinois and Kansas, Clyde Tombaugh was fascinated by space. He spent evenings studying Jupiter and Mars though a homemade telescope. He dreamed of going to college and majoring in astronomy, but those dreams were dashed when a summer storm ruined a harvest and made further education an economic impossibility. Nevertheless, Clyde sent the Lowell Observatory a collection of drawings he'd done of the planets and was almost immediately offered a job working with their latest camera telescope. Over the next year he photographed the night sky, trying to locate the mysterious "Planet X." Finally, in February of 1930, he found photographic evidence. After further study, the Lowell Observatory announced the discovery of this new ninth planet on March 13, 1930.

The next morning, the news of this new planet appeared on the front pages of the world's newspapers. In Oxford, England, a retired librarian read the article to his granddaughter over the breakfast table. When she learned that the new planet had yet to be named, eleven-year-old Venetia Burney -- who had an interest in both space and mythology -- immediately suggested the name Pluto, for the Roman god of the underworld who, like the planet, could also be invisible to the human eye. Venetia's well-connected family forwarded her suggestion to the Lowell Observatory, where Tombaugh and his colleagues were considering naming the planet Atlas, Zeus, Cronus, Zymal, Minerva, or Constance. Constance? Finally, members of the Observatory voted on the name and Pluto won unanimously. The official brand-new name for "Planet X" was announced on May 1, 1930.

Okay, by now you are probably wondering what this has to do with children's books.

Earlier I mentioned the youngest person ever to get a Caldecott Honor, Plato Chan. The son of a Chinese diplomat, Plato was born in New York, but grew up in Germany, France, and England. He began drawing at eighteen months and by the age of six was designing patterns for French fabric companies. He had several public exhibitions in Europe and painted a portrait of England's queen, which he hand-delivered to Buckingham Palace. When World War II broke out, Plato's father was sent to an internment camp in Germany and the rest of the family finally returned to New York. It was there that Plato's mother, Chih-Yi, adapted a traditional Chinese tale for her son to illustrate. THE GOOD-LUCK HORSE was published in 1943, when Plato was barely thirteen years old. 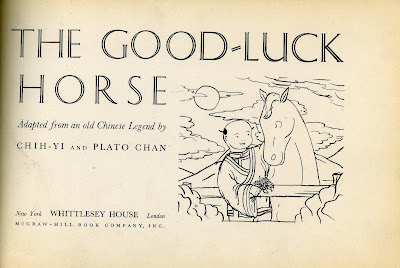 The book contains both pen-and-ink illustrations: 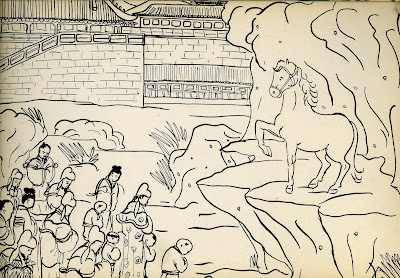 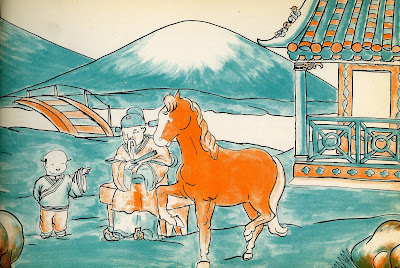 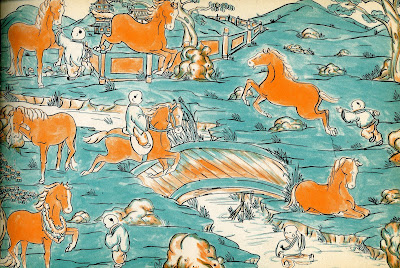 The following year, THE GOOD-LUCK HORSE was named a Caldecott Honor Book. 1944 also brought the publication of Plato's second book, THE MAGIC MONKEY, which was written by his year-older sister, Christina (apparently another child prodigy!) 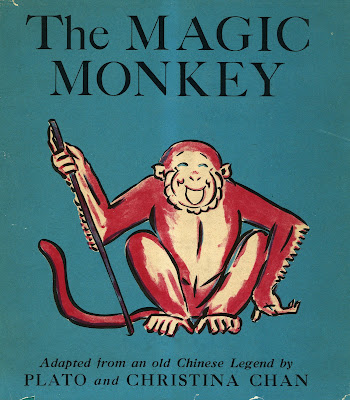 At this point you are probably wondering what the story of Caldecott-Kid Plato Chan has to do with Clyde and Venetia.

As mentioned earlier, the discovery of the new planet was announced on March 13 and appeared in the newspapers on March 14, 1930. That's the day young Venetia came up with the name for the planet.

March 14, 1930 was also the day Plato Chan was born. When his parents learned a new planet had just been announced, they took the news as a great portent for their son's future and decided they would name him after this new discovery.

Unfortunately, at that time the new celestial body was still being called "Planet X" -- so for the first several weeks of the baby's life the poor kid was known as...X.

On May 1, when the name "Pluto" was publicly revealed, Mr. and Mrs. Chan were extremely disappointed. Wasn't Pluto the guardian of Hades? Wasn't that an awfully dark and depressing name to give a newborn? Even "X" was better than "Pluto"! That's when someone suggested that, since the baby had a rather serious, philosophical demeanor, "Pluto" could be changed to "Plato."

So that's why the illustrator of THE GOOD-LUCK HORSE went by the name of Plato Chan...and not Pluto Chan...or X Chan...or Atlas, Cronus, Zymal or Zeus Chan.

And thank goodness they didn't name the planet Constance or Minerva. That would surely have embarrassed young Mr. Chan. Johnny Cash's "Boy Named Sue" would have nothing on "A Boy Named Minerva."

As for "whatever happened to?" the subjects of this story, Pluto lost its status as a planet on August 24, 2006. It's now considered a "dwarf planet," though some scientists disagree with that decision. Clyde Tombaugh eventually did go to college and study astronomy. He had a long and important career in the field before dying at age 90 in 1997. Venetia Burney (later Venetia Phair) became a mathematics and economics teacher and died just a couple weeks ago, also at age 90.

The boy named after the planet remains something of a mystery. I've never heard whether his father returned from internment, nor have I learned why the young artist never illustrated another book after THE MAGIC MONKEY. Plato apparently remained involved with children's books throughout his teens, appearing at literary events with his sister and performing "chalk talks." But finding information about the years after that is about as hard as finding Pluto in the night sky. According to his 2006 obituary, Plato Chan attended Columbia and Yale, married an eye doctor, and lived in Philadelphia. But did his future include art? I don't know.

I'm fascinated, though, that all three of the people discussed in today's blog are best known for things that happened when they were quite young. One discovered a planet, one named that planet, and the third -- almost named for the planet -- became the first and only child artist to ever receive a Caldecott Honor.

It must have been in the stars.
Posted by Peter D. Sieruta at 9:59 AM

It should be noted that the IAU’s controversial demotion of Pluto is very likely not the last word on the subject and in fact represents only one interpretation in an ongoing debate. Only four percent of the IAU voted on this, and most are not planetary scientists. Their decision was immediately opposed in a formal petition by hundreds of professional astronomers led by Dr. Alan Stern, Principal Investigator of NASA’s New Horizons mission to Pluto. Stern and like-minded scientists favor a broader planet definition that includes any non-self-luminous spheroidal body in orbit around a star. The spherical part is important because objects become spherical when they attain a state known as hydrostatic equilibrium, meaning they are large enough for their own gravity to pull them into a round shape. This is a characteristic of planets and not of shapeless asteroids and Kuiper Belt Objects. Pluto meets this criterion and is therefore a planet.

I feel so sorry about Pluto. I hope Laurel is right...

Bybee, here are some links to efforts to get Pluto's planet status officially reinstated:

Petition of astronomers who rejected the demotion of Pluto here: http://www.ipetitions.com/petition/planetprotest/

Great Planet Debate conference held in August 2008 in response to the demotion (you can listen to audio transcripts): http://gpd.jhuapl.edu/

Advocacy sites: http://www.dwarfplanetsrplanets2.com
This one has email information to contact the IAU and its president and ask that they reopen this issue.

Nice blog, This is my first time visiting here.

Well I'm not very interested in children books, but I like to colect the mafalda's comics from newspaper I don't know if that gets into the children category.
Thanks