In 1951, a first-time author named Natalie Savage Carlson submitted a manuscript of French-Canadian tales to Harper and Brothers. Accepted by

the brilliant editor Ursula Nordstrom, THE TALKING CAT AND OTHER STORIES OF FRENCH CANADA was published in 1952 and immediately won the prestigious New York Herald Tribune Children’s Spring Book Festival Award. Later that year, however, Ursula Nordstrom rejected Ms. Carlson’s second manuscript, ALPHONSE, saying she did not feel it was “a worthy successor to THE TALKING CAT.” Nordstrom suggested that Carlson submit the manuscript to Margaret McElderry at Harcourt, adding “She does lovely books.”

Apparently ALPHONSE wasn’t quite lovely enough for Ursula’s own list!

As it happened, Ms. McElderry did accept the book and ALPHONSE, THAT BEARDED ONE was released by Harcourt in early 1954. Here’s the cover of the book:

Oh shoot. I didn’t line that up on my scanner quite right. Let me move it over so you can get a look at the entire cover: 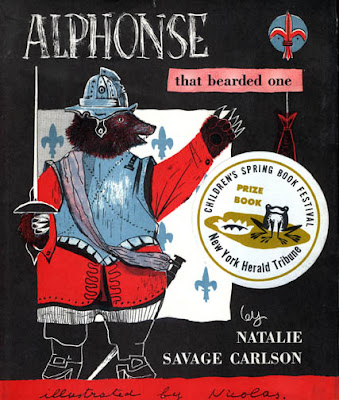 Hey...wait a minute....! What’s that I see on the right side of the jacket? Is that...is that...a sticker saying this book won the New York Herald Tribune Spring Book Festival Award...?

How can that be?

Didn’t Ursula Herself say that this book didn’t “come up to the high standard of THE TALKING CAT”?

The purpose of this blog entry isn’t to pick on Ursula Nordstrom. She was the best in the business and probably published more classic titles than any other twentieth-century children’s book editor. But even she made mistakes (she also rejected Robert Cormier’s CHOCOLATE WAR and I suspect she was among the myriad who turned down Madeleine L’Engle’s A WRINKLE IN TIME during its long quest for publication.) No editor is infallible. No editor gets it right 100% of the time. I doubt most even get it right 80% of the time. (I personally know one editor who’s only right about 6% of the time, but that’s a whole ‘nother story.)

What fascinates me about this case isn’t simply that Nordstrom rejected ALPHONSE, but that she did it so brusquely. In his indispensable book DEAR GENIUS : THE LETTERS OF URSULA NORDSTROM (a volume that is never far from my desk nor far from my thoughts), Leonard Marcus includes Nordstrom’s actual rejection letter:

With a heavy heart I must write you that we still think ALPHONSE (revised version) is not a worthy successor to THE TALKING CAT.

This makes me sad. I read it, and so did Miss Powers and Miss Russell. So we are all sad. We understand that you will want to send it to another publisher and of course we all wish you luck with it.

Declining this book is a tough decision, because of course it probably will be taken elsewhere and so you will probably feel any future books by you should go to the publisher that accepts ALPHONSE. So we are in the unfortunate position of being sorely tempted to take ALPHONSE so that we will keep you on the list. But we shouldn’t accept and try to publish it on that basis because it, in our judgment -- and we may be wrong, doesn’t come up to the high standard of THE TALKING CAT. So we have decided that in spite of everything we must regretfully decline this manuscript. I can’t tell you how sorry I am, Natalie.

If by any remote chance it is not taken by one of the top publishers, we certainly hope that you will send us something else by you in the future. Let me know what happens, will you? I have been happy to think of you as a Harper author up to now. Coming unexpectedly upon the delightful manuscript of THE TALKING CAT, and publishing it so successfully, was one of the high spots in my experience as an editor. Well, let me know who takes ALPHONSE, if you are willing, will you? By the way, I hear via the grapevine that Harcourt turned down THE TALKING CAT and I think they would be EXTREMELY glad to have a chance at ALPHONSE. You know Miss McElderry, don’t you? She does lovely books.

We return the manuscript herewith. Please don’t disappear into the blue now. Let me hear from you and tell me how things go with you and the manuscript.

Now granted, we all see things differently. This letter may sound heartfelt and conciliatory to you (especially if you sit behind an editor’s desk) but to me (someone on the other side of that desk) it seems unduly harsh. I don’t doubt Ursula’s sincerity at all, but I’m just surprised she didn’t try to smooth things over by saying something along the lines of, “Why not set this manuscript aside for a while and try writing something else for us? After stretching your skills on a new book, you may return to ALPHONSE with fresh eyes and see its problems and/or potential.” I guess what bugs me MOST is that Ursula seems quite willing to lose Carlson permanently to a different publisher. Again, this may just be me, but the line “Please don’t disappear into the blue now” sounds awfully dismissive. Granted, it’s not as bad as “Don’t let the door hit ya where the good Lord split ya,” but it just seems like the kind of hollow nicety that's automatically tossed off as an author goes crawling out the door, dejected and rejected -- and with his "tale" between his legs. (Believe me, I know whereof I speak.)

I can only imagine the sense of vindication Natalie felt when, not only was ALPHONSE accepted by Harcourt...but it also went on to win her another New York Herald Tribune Children’s Spring Book Festival Award!

I wonder how Ursula felt. Was she sorry she rejected ALPHONSE or did she always continue to believe she’d done the right thing?

Perhaps the most amazing part of this story is that even though Ursula cut her loose with the expectation that she’d move to a new publishing house, Carlson apparently did not bear the editor any hard feelings at all! In fact, despite the fact that Harcourt published ALPHONSE and she racked up yet another New York Herald Tribune Children’s Spring Book Festival Award (what a mouthful!) Carlson ended up returning to Ursula. Her very next book, WINGS AGAINST THE WIND, was published by Harper in 1955. Incredibly, it was named a runner-up for that year’s NYHTCSBFA (even the acronym is long and unwieldy!) And for the next two decades, Harper continued to publish nearly all of Carlson’s work, which included the Newbery Honor THE FAMILY UNDER THE BRIDGE (1958), the popular THE LETTER ON THE TREE (1964), important early books on civil rights such as THE EMPTY SCHOOLHOUSE (1965), the much-loved “Orphelines” series, and many more.

I ask myself what I would have done if I were in Carlson’s shoes. If Ursula gave me the big brush-off, would I return to her fold? Maybe, maybe not. ...But if I did, I’d probably always show up at her office wearing a sweatshirt embossed with the cover illustration of ALPHONSE “that book I published with Harcourt.” And I’d use 1954 as a touchstone in every author-editor conversation (“Back in 1953...oh wait, it was 1954 -- I remember because that was the year I won that award for my Harcourt book....”) and I’d probably even call my dog, my cat, or even my kid “Alphonse” just so I could repeat the name over and over whenever I got a phone call from Harper (“Hello? Oh hi, Urs. Could you hold on a minute, Alphonse is barking at the back door and I have to let him in the house. In fact, could I call you back later? I also need to go pick up my son Alphonse at school.”)

But that’s just me: pugnacious. Pugilistic. And what’s that other word? Oh yeah, repugnant.

But Natalie Savage Carlson was a much nicer person than that. She obviously didn’t hold a grudge -- and she ended up publishing a great list of books at Harper after the ALPHONSE rejection. I wonder if she and Ursula ever discussed that letter again or just considered it “water under the bridge”? I guess we'll never know. All I know is that in 1971 Ursula wrote Natalie a very different sort of letter, reminiscing about their “wonderful and happy relationship all these years,” and ending with the words “I am so glad that you are ours and we are yours.”
Posted by Peter D. Sieruta at 2:20 AM

I would not have liked to get that letter at all. Ursula just keeps turning the knife. That last bit about Harcourt rejecting the first book seems really nasty. But probably she didn't mean it that way...

I realize that I'm not a winner of the NYHSBCAP, but I wouldn't hold a grudge over something like that. In fact, it was a really nice letter.
Today a writer is lucky to get an terse email forwarded from their agent.
For instance, the editor that signed my first two books was presented with a couple of others, one of which I never did get an answer on one way or t'other.
And yet we're still Facebook friends.

I was interested to hear about Margaret McElderry's role in getting Alphonse published. I had the great fortune to work with Margaret when Atheneum-Argo published Ratha's Creature in 1983. She was a magnificent person and an excellent editor. Has anyone published a biography of her?