The July issue of VANITY FAIR featured an “oral history” of the internet, told by dozens of individuals who created and developed the computer network that changed all of our lives.

Personally, I’d like to shake the hand of each and every one of them.

For most of my life I felt very much alone with my interest in children’s books. Except for some bookstore friends and an occasional librarian, I didn’t really know anyone with whom I could discuss children’s books of the past, share information and opinions about current favorites, or wager on which titles might win awards in the future.

Then along came the internet with its create-your-own-community conviviality and suddenly I had coast-to-coast "book buddies." I could start the morning talking with my friend in Boston who's acknowledged as one of the top children's book experts in the nation, have a lunch-time conversation with a university librarian in Iowa, and then spend the evening discussing books with a California friend who has served on both the Newbery and Printz committees.

The internet also changed the commerce of bookselling. No longer confined to a few local bookstores, we can now "browse the stacks" at any number of online bookstores from The Biggie to little mom-and-pop used bookshops that list their wares online. And I've met some really great booksellers and fellow collectors in cyberspace.

One online friend from Connecticut, who has certainly enriched my collection with her book-collecting tips and discussions, was the first person to suggest I start this blog.

If it hadn’t been for that suggestion, I wouldn’t have made even more friends here at Collecting Children's Books:

...There's the librarian from Cambridge, Massachusetts who claims she’s “far too shy” to post comments on my blog, yet sends me the kind of thought-provoking and entertaining letters offline that really SHOULD be shared with everyone online.

...There's my amazing (and amahzing) correspondent in New York who shares so many similar interests that we joke about being separated at birth.

...There's a well-known editor who swoops in occasionally to make a pithy comment in teeny-tiny print.

...I've even reconnected with a childhood friend who stumbled across my blog, as well as a cousin in Macon, Georgia.

...And how about those visits from famous authors who drop by from time to time with comments? I won't list them all, for fear of accidentally leaving someone out, but it's a real thrill every time I see one of those much-admired names pop up on this blog.

Ultimately, I'm grateful to every single blog-trotter -- named or anonymous -- who stops by for a visit.

I've been thinking about all this because of something that happened last night. I arrived home from work to find two packages waiting.

A reader of this blog, Esperanza from Oregon, had attended ALA in Anaheim and sent me a poster from one of this fall's most anticipated books, RAPUNZEL'S REVENGE, a graphic novel written by Newbery Honor winner Shannon Hale and her husband Dean, and illustrated by Nathan Hale who is, apparently, not a relative. As if it weren't nice enough just to send the poster, I realized that Esperanza had actually stood in line to have it personally autographed by Shannon and "Nate" Hale. 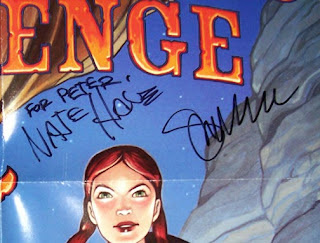 Thank you Esperanza for this rare and much-appreciated gift!

The other package was from writer-illustrator Leo Landry. After reading my blog he recently wrote and asked a couple questions, which I tried to answer as best I could. Truthfully, I don't think my answers were THAT helpful, but by-way-of-thanks he sent me a package containing two of his own books -- the rollicking EAT YOUR PEAS, IVY LOUISE! and his recent bedtime adventure story SPACE BOY: 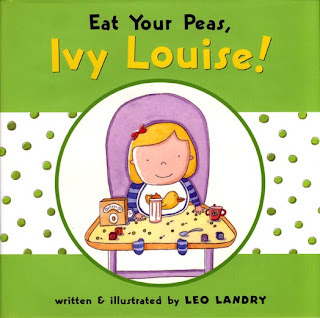 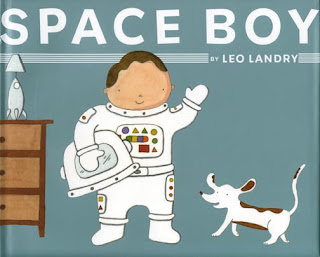 Even though I probably only gave him fifty cents' worth of advice, he made his books priceless to me by personally inscribing them AND including a hand-drawn sketch in each. Wow! 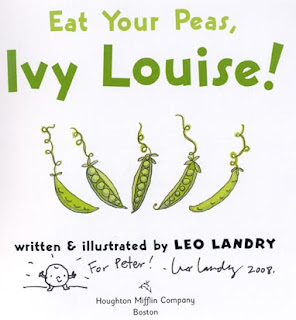 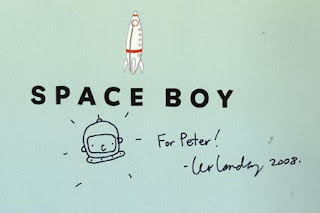 And thank you to everyone else who visits this blog, or leaves comments, or sends me pesonal e-mails.

You're some of the nicest people I've never met!
Posted by Peter D. Sieruta at 10:09 AM

OMG! you have an autograph from Shannon and Nathan Hale!!! I love every single book of Shannon!

I am a children's author and anyone who loves the lovely world of children's stories must be nice people. kind regards alan brunwin.

Hi everyone I did leave a message on your post saying how nice people you must be. I'm Alan Brunwin a children's author from England. If anyone of you like poetry have a read of some I have put on my google blog Some are true life and they are for everyday people to read please let me know if you like any cheers alan brunwin
www.brunwin.blogspot.com