Fireworks, Flags, and the Fourth of July

It used to be that I’d wake up every Fourth of July to the sound of fireworks exploding but, as I write this it’s mid-morning and I haven’t heard a single “boom” or “bang.”

On this holiday I’m always reminded of RUFUS M by Eleanor Estes. 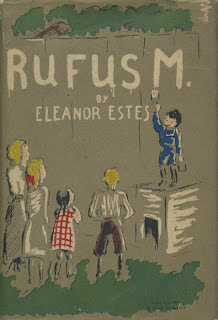 The Fourth of July finds a bored Rufus sitting on the bottom step of the Moffats’ porch burning punk -- which according to my dictionary is a “dry spongy substance made from fungi.” Joey has already shot all his firecrackers and Janey has lighted her snakes and watched them unwind on the pavement, so the siblings are glad that older sister Sylvie prefers night-time fireworks -- “otherwise the Fourth of July would be over and it was only nine o’clock in the morning.”

The Moffats spend the holiday on the beach and are told to return home when they see the steamboat that runs between New York and New Haven at four o’clock. Back when I read this book as a child, the name of the steamboat didn’t mean anything special. Today when I looked at the volume I discovered the steamboat is called “the Richard Peck.” Now everyone knows the name “Richard Peck” not as a steamboat, but as a contemporary, Newbery-winning author.

...The Moffats lived in New Haven, Connecticut and that’s also the setting for another children’s book about this holiday, Wilma Pitchford Hays’ FOURTH OF JULY RAID. 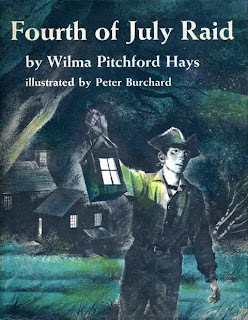 This was one of several short historical novels the author wrote about holidays. I have three or four in my collection, ordered from a used bookstore in Hyannis Port, Massachusetts. The bookstore’s description of this volume said that it had been signed by a previous owner -- so I of course hoped that the previous owner’s last name might start with K. But it turned out to be someone named Douglas Banks. Oh well, maybe he was a neighbor of the Kennedys.

Tom Morris, the protagonist of FOURTH OF JULY RAID, is shown wearing a three-cornered hat and that put me in mind of Johnny Tremain, hero of the eponymous novel by Esther Forbes -- a book that many rank as the best Newbery winner of all time. However, when I took my copy of the book off the shelf I was surprised to discover that...

...although Johnny wears a three-cornered hat on the cover of the recent hardcover illustrated by Michael McCurdy: 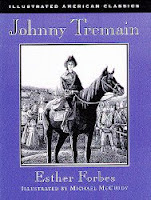 ...and the cover of the paperback version:

...and on the cover of the Disney DVD: 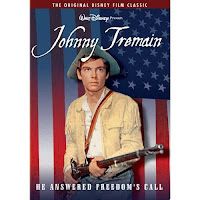 ...he does NOT wear a tri-cornerd hat on the cover of the original book -- though in my mind’s eye he always did! 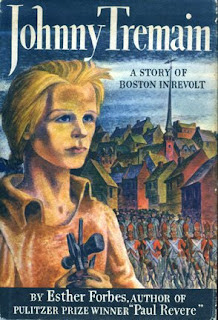 WHERE DID THIS WOODCUT COME FROM?

Lynd Ward did the dustjacket illustration of the original 1943 edition of JOHNNY TREMAIN. The book also includes illustrated endpapers, a frontispiece, and decorations at the start of each chapter.

However, this morning, when looking up info on the book, I came across this Lynd Ward woodcut featuring Johnny Tremain, which is owned by the University of PIttsburgh. 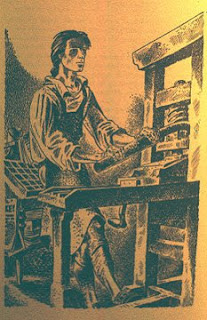 Since it most definitely did not appear in the original book, I wonder where it came from. Did Lynd Ward do another illustrated edition of JOHNNY TREMAIN? If so, I do not know about it. I will have to keep researching this one.

Does anyone remember the reference to JOHNNY TREMAIN in Paul Zindel’s great young adult novel THE PIGMAN? That novel’s wisecracking protagonist, John Conlan, once wrote a book report on JOHNNY TREMAIN and got a higher grade than his friend Lorraine.

Lorraine remarks, “You might also be interested in knowing that the only part of Johnny Tremain that John did end up reading was page forty-three -- where the poor guy spills the molten metal on his hand and cripples it for life.”

A FAVORITE FOURTH OF JULY STORY

A couple years ago I came across Janet S. Wong’s picture book APPLE PIE FOURTH OF JULY. I loved it, but it also made me mad. 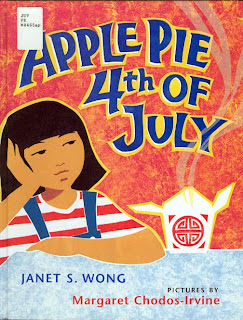 I really enjoyed the story of a young Chinese girl who spends Independence Day hanging out at her parents’ take-out store and ends the evening sitting on the roof eating apple pie and watching fireworks.

You can practically hear the fireworks explording in this picture, can’t you? 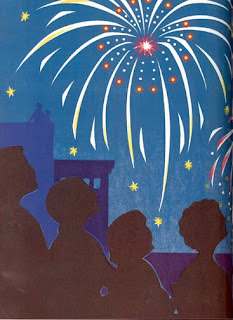 ...So you’re probably wondering why the book made me mad. Well, you may notice the library label on the above cover. I’m mad because Ms. Wong came to town a few years ago to do a signing and, since I was unfamiliar with her books, I did not bother to attend. A couple years later I read APPLE PIE FOURTH OF JULY and kicked myself for not discovering it sooner. If I had, I could have a signed copy of this great book in my collection right now instead of having to borrow it from the library when I want to read it!

I guess that’s a lesson for book collectors. If you hear that an author is coming to town, it’s a good idea to do some research first...maybe borrow a couple of their books from the library and read them...rather than learn too late that you love their work and missed your one big chance to meet them and have their books signed.

They say you shouldn’t display an outdated flag, so I don’t hang my own flag outside on patriotic holidays these days, but I still treasure it.

It’s only got forty-nine stars, which means it was manufactured sometime in the narrow window between January 3, 1959 when Alaska entered the union and August 21, 1959 when Hawaii became a state.

Although we already had fifty states by the time I attended first grade, every morning we said the Pledge of Allegiance to this old, forty-nine star flag displayed in the corner of the room.

At the end of that year our teacher announced that the school had finally received a bunch of brand new flags for the classrooms. She told us that she was going to give the retired flag to someone in our class who had been a “good citizen” all year long. She told us to stand at our tables, close our eyes, and hold out our hands.

I stood in front of my chair and heard her walking all around the room on the hard wooden floors...and then she stopped behind me and placed the flag in my hands.

I still remember running home that June afternoon with the flag streaming behind me in the breeze.

It wasn’t until many years later that I thought about all the other kids standing in front of their chairs that day, eyes shut, opening and closing their palms in anticipation...and hearing the teacher walk past them.

Now I wish there was some way we all could have shared that flag. 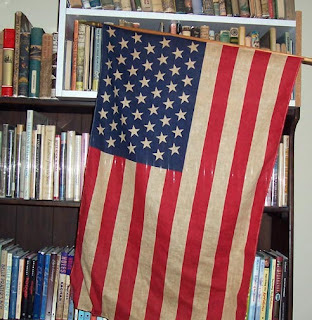 BACK TO RUFUS M, ON THE BOTTOM STEP

Don’t worry, Rufus didn’t spend all Independence Day burning fungi on his porch. After going to the beach with his siblings, hunting for buried treasure, and coming home when they saw the Richard Peck steamboat go by, the Moffats gathered outside that evening to light sparklers and watch Roman candles explode in the sky: “It was truly a glorious evening. And Rufus stomped up to bed tired and happy and wondering how he could wait until the next Fourth of July.”

Hope your holiday is just as happy as his was.
Posted by Peter D. Sieruta at 11:54 AM

Happy Independance Day from a Canadian! I love the Moffats books and Lynd Ward is one of my favourite illustrators.

Did you ever wonder what you did to be considered a good citizen? Working in the library, maybe?

I'm not sure why I never read the Moffats' books, but it's an experience I wish I'd had.

One of my favourites was Enid Blyton's 'Magic Faraway Tree' books. Bayard have nice collection of books to suit ages 3 - 5, 6 - 9 and 10 - 12 respectively : StoryBoxBooks, AdventureBoxBooks, DiscoveryBoxBooks

happy 4th of july! 'nice to get a glimpse of your bookshelf! can you show us more? :)

Is that Johnny or his friend Rab?