I once thought I was the only person who looked forward to the American Library Association awards as if they were Christmas.

But over the past few years, thanks to children's book blogs, listserves, Facebook, and Twitter, I've realized that I am part of very large community of people who feel the same way.

I also wondered what I'd do if a "Newbery Day" ever rolled around and I was unable to participate. What if I had to attend a funeral that day? What if I was in the hospital or something? (I had visions of myself sneaking out of the funeral home to read the award announcements on a laptop in my car...or ripping out an IV and running to the nearest bookstore to buy the winning books.) Such extreme events did not occur this year -- thank goodness -- but it was a bit of a bad day anyway, due to some other painful, personal events going on in my life right now. A friend who knows me well said, "I cannot think of the word Newbery, at any time during the year and not think of you, and to imagine you not almost physically buzzing with excitement is very sad."

Yeah, it was kind of sad, but I realized today that Newbery Days come in all types: happy, sad, good, bad....

All are memorable in their own way.

Last night found me sitting in front of the computer till 2:00 AM, looking for clues about the awards and trading Newbery gossip with friends.

Then I got up at 7:30 AM and fired up the computer again. I always take Newbery Day off work, so that was not an issue. Then began The Wait until 8:45 AM. After years of getting the award info a week late...a day late...or (in recent years when a dial-up computer connection) a few minutes late, for the second year in a row I was able to watch the live webcast while sitting at my desk in my pajamas.

As always, it was full of surprises.

Which is another way of saying, I was completely wrong in nearly all my predictions!

But then so was nearly everyone else and that's part of the fun of the awards.

Just for the sake of keeping a record here, let's go over the winning books:

The Caldecott Honors were BLACKOUT by John Rocco: 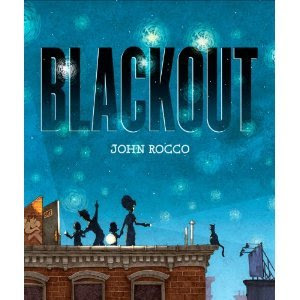 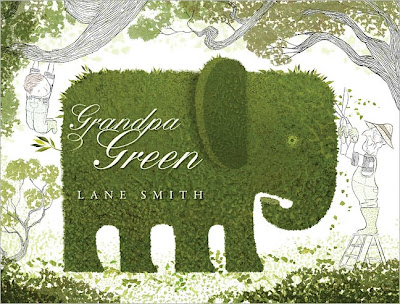 and ME...JANE by Patrick McDonnell: 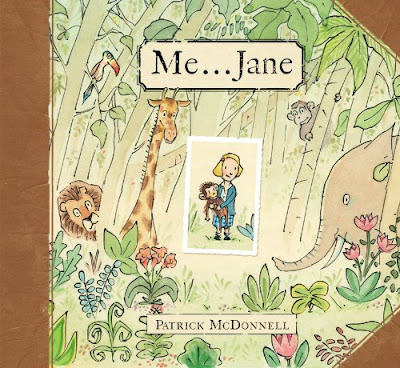 The 2012 Caldecott Medal went to A BALL FOR DAISY by Chris Raschka: 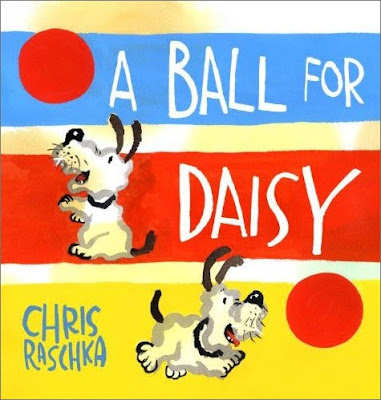 Think they'll place the gold medal sticker right over one of those big orange balls on the cover? This is Chris Rashka's second Caldecott, having won in 2006 for THE HELLO, GOODBYE WINDOW.

This year's Printz Honor Books were WHY WE BROKE UP by Daniel Handler: 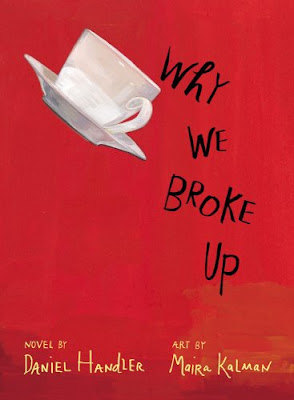 THE RETURNING by Christine Hinwood: 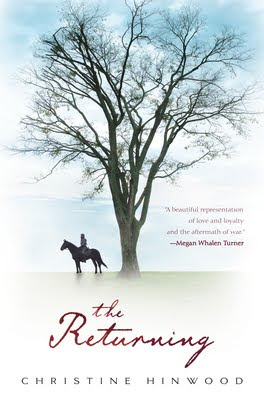 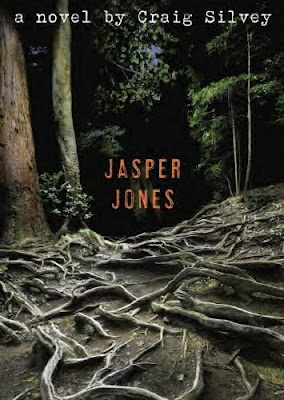 and THE SCORPIO RACES by Maggie Stiefvater: 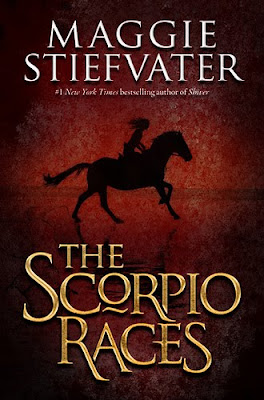 The 2012 Printz Award went to WHERE THINGS COME BACK by John Corey Whaley: 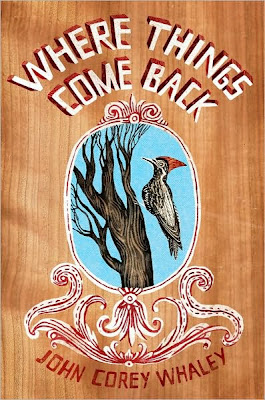 I have mixed feelings about this list. I didn't like WHERE THINGS COME BACK at all (should I read it again to see what I missed?) and thought WHY WE BROKE UP was interesting, but too long by a third. I enjoyed THE SCORPIO RACES, but haven't quite finished either THE RETURNING or JASPER JONES yet.

This year's Newbery Honor Books were INSIDE OUT & BACK AGAIN by Thanhha Lai: 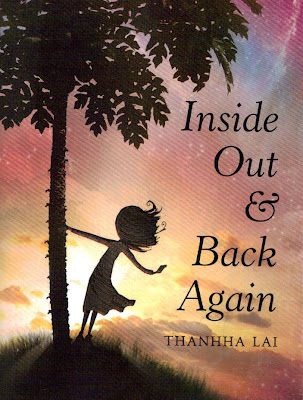 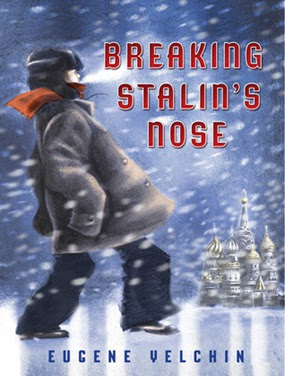 The 2012 Newbery Medal went to DEAD END IN NORVELT by Jack Gantos: 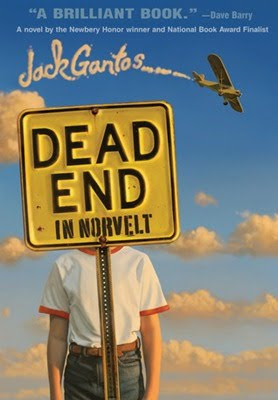 I have not read BREAKING STALIN'S NOSE yet, but have to admit that I wasn't a big fan of INSIDE OUT AND BACK AGAIN. People often criticize novels in verse for being less poetry than prose stories chopped up into artistic lines. In the case of INSIDE OUT, I sometimes found myself agreeing with that criticism. On the other hand, I now believe that DEAD END IN NORVELT may be a stronger selection that I first thought. When I first read the book, I had a few criticisms, but also realized that it was the kind of novel I would have loved when I was a kid. I think this offbeat, quirky book is going to please a lot of readers and will probably go down in history as one of the better choices. Of course only time will tell....

This morning, as soon as the webcast ended, I took stock of which titles I had in my collection. I try to have an ARC (advance reading copy) and a first edition of every Newbery and Printz winner.

This year I had an ARC and first edition of:

DEAD END IN NORVELT
WHY WE BROKE UP
THE SCORPIO RACES

I had first editions, but no ARCS of:

And I had an ARC, but no first edition of:

Fortunately, my independent bookstore had a hardcover copy in stock, so I rushed over there to pick it up. Now I have all the books in first editions and just need a few ARCS, which I hope will turn up over time.

In years past, Newbery Day has seen me rushing to other bookstores trying to pick up extra copies of these books in hopes of reselling them for a profit at a later time. This year I did not do that. Part of the reason is that I used to make a quick run to all the local Border's stores (four within six miles of where I live) but now they are gone. The other reason is that there was always so much competition for the books. I felt bad when someone grabbed the last remaining copy just as I was reaching for it. And felt even worse when I grabbed the last copy when someone else was reaching for it.

This year I decided to leave them all for other collectors.

Good news for them.

Good karma (I hope) for me.

So that was one thing that made Newbery Day different this year.

Another thing was the weather. Some years Newbery Day is bright and cold. Some years it's gray and chilly. One year we had a blizzard. This year was warm and rainy.

Normally I go to lunch at Ponderosa on Newbery afternoon, but my Ponderosa closed last summer, so this year I just went to a take-out Chinese place.

Something else different: normally I take one of this year's winners to read at lunch. This year I took a brand-new book from 2012 to read. Who knows -- maybe it will be next year's Printz winner. Newbery Day is always a day for looking back and looking forward. Looking back at the books we read and loved the previous year, and already thinking about the books we'll be reading in the forthcoming year.

Today I found myself thinking about the many children's and young adult books that have changed my life...the people in this field that I met, either in person or via the computer...and the libraries and bookstores where I have spent so much time.

Way back in the early 1980s, I used to shop at a mall bookstore called The Children's Bookmark. That was where I got my first Cynthia Voigt book, HOMECOMING. M.E. Kerr's LITTLE LITTLE. Robert Cormier's EIGHT PLUS ONE. Katherine Paterson's Newbery winner JACOB HAVE I LOVED. I have many fond memories of that little store. I also remember one incident I witnessed outside the store. A mother and father were heading for the mall exit, when a little girl, maybe six or seven years old, drawn by the word "children" on the sign, started begging to go in the store. In a hurry to leave, her parents dragged her away from the Children's Bookmark, while she kicked and whined, "But I NEEEEEEED bookmarks!"

That girl is probably now pushing forty, perhaps with little kids of her own. But I still think of her plea for "bookmarks" after all these years. For me, each Newbery Day is slightly different -- a happy day, a sad day; a day when I like the winning books, a day when I don't; a snowy day, a warm day; a day when I eat at Ponderosa or end up with Chinese take-out; a day when I look back at last year's books and look forward to next year's books.

I celebrate every "Newbery Day" and I remember each one of them, going back years and years.

They are bookmarks marking the pages of my life.
Posted by Peter D. Sieruta at 7:03 PM

A lovely post, Peter, though I'm sorry you've been having a rough time.

Last year I wasn't able to take off work. I couldn't stand not knowing until twelve hours after everyone else knew, and I'm a nurse and can't look at a computer during the day, so I had a friend text me the results. I only asked for the Newbery winner and honors, but she kindly texted me all the ones she knew I was interested in (which is to say, everything, except maybe the Alex and Odyssey). I carried my phone in my pocket set to "vibrate", hoping I might have a few moments to check my texts in between patients, but it didn't happen. For over an hour, I felt my pocket BUZZ every few seconds and wondered "What is it? Is that the Barbie book winning the Sibert? Is it Crossing the Tracks getting a Printz Honor? Is it One Crazy Summer taking the Newbery?" I finally read my texts hours later, and didn't realize the Moon Over Manifest win was considered a big upset until I got home.

Hey, is Jack Gantos the first Newbery winner who is an ex-convict?

We all NEEEEEED bookmarks, Peter. I couldn't imagine what the title of this post meant, and when I got to the end it all made more sense than I could have imagined. Very touching, also. I hope the take-out place at least had a dragon up for decoration. Wishing you a happy Chinese new year and clear path ahead--

Wishing you better times in the new Newbery year. This was the first year I really followed it much and as it happened I had tons of work in the morning and then the Internet went down in the office, which almost never happens.

Wendy, ha! I wonder about that? Probably even Peter won't be able to find that out for sure. I mean, how would we find out if Ann Nolan Clark was taken in as a teen for cow tipping or something equally inappropriate?

I stayed up late so I could see who the winners were before I went to bed.

You did mention the Newbery winner in your 'Twas the night before Newbery post. Sorry you had a rough Newbery day. Also, that's a shame about Ponderosa.

In honor of Newbery week, I'm reading Julie of the Wolves.