When young-adult author Paul Zindel was at the top of his game, there was no one better. His first novel, THE PIGMAN, is a landmark of YA fiction -- hilarious, poignant, eccentric, and honest.

Many of his later novels are very entertaining, but the characterizations are often over-the-top, the tone is frantic, and the writing seems repetitive and forced.

The same is true of Mr. Zindel's plays. He won the Pulitzer Prize for THE EFFECT OF GAMMA RAYS ON MAN-IN-THE-MOON MARIGOLDS, a pitch-perfect drama about an emotionally-wounded girl who is able to free herself from an abusive mother.

Zindel was never able to re-capture the brilliance of MARIGOLDS in his later plays, which were usually loud, labored, and featured grotesque characters.

It was actually Mr. Zindel's skill as a dramatist that brought him to the field of young adult fiction. A public television presentation of MARIGOLDS caught the attention of legendary children's book author and editor Charlotte Zolotow, who suggested that Zindel try his hand at a young adult novel. Beginning with the publication of THE PIGMAN in 1968, the author continued on a dual career path, regularly publishing novels for young people as well as writing plays and screenplays for general audiences. He seemed to keep these parts of his work compartmentalized. Though an acting edition of THE PIGMAN has been performed at high schools all across the country, Mr. Zindel did not write it.

Only once did the worlds of YA author and playwright collide -- and the results were fascinating. 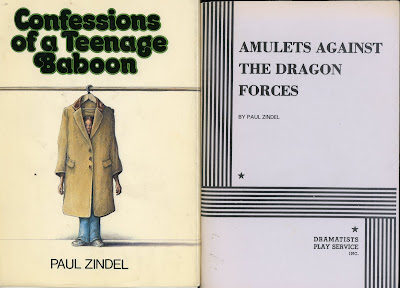 For many years I've had a tradition of going to the bookstore on New Year's Eve and picking up a book (or three) to read over the holiday. On New Year's Eve 1977, I stopped at Little Professsor Bookstore and bought CONFESSIONS OF A TEENAGE BABOON by Paul Zindel. I'd been a big fan of the author's books since the beginning and couldn't wait to read this new one.

The first-person story concerns fifteen-year-old Chris Boyd, who has spent much of his youth residing in other people's houses as his mother -- a home nurse -- tends the sick and dying. When Mrs. Boyd is sent to care for elderly Carmelita Dipardi, she immediately butts heads with Carmelita's thirty-year-old son Lloyd, an alcoholic and irresponsible shipyard worker who throws wild pool parties for all the neighborhood teenagers and is waited on hand-and-foot by a sixteen-year-old boy, Harold, who idolizes him. Chris, a chatty kid who tells big lies, actually has a lot in common with Lloyd Dipardi (both have a love/hate relationship with their emasculating, emotionally-abusive mothers -- a recurring character in Zindel's books) yet Lloyd has nothing but contempt for the teenager he calls a "nurd" [sic] and cruelly mocks Chris in hopes of toughening him up ("You don't know how to hang up your clothes after you take them off. Or about polishing your shoes. Have you ever looked in the mirror when you walk? You droop over. You don't even know how to take pride in your body. You don't know the first thing about being a man.") Tensions continue to mount in the Dipardi house, with Chris's mother stealing from her employer (kleptomaniac nurses are another recurring theme in Zindel's novels), Carmelita's health declining, and Lloyd becoming increasingly confrontational. Reading the novel, I found both Chris and Lloyd difficult to like. Chris seems a lightweight character whose romantic feelings for neighborhood "concubine" Rosemary ring hollow. And even when Lloyd opens up about being a misfit ("I know what it's like to have a witch for a mother. And just because my father was around physically doesn't mean I had a father any more than you do. I really feel for you, kid, and I don't want to see you grow up twisted.") and tells Chris about his own growing up years ("I joined a gym. I put inches on my arm. I brought my voice down an octave! I even put a mirror in front of the telephone so I could study my expressions. I did everything I could to present myself as a man.") it's more hectoring than helpful. And I never could figure out the character of Harold, who always seems to be at Lloyd's elbow, serving up a plate of fruit salad or handing him a beer. When I finished reading CONFESSIONS OF A TEENAGE BABOON on January 1, 1978, I felt strangely unfulfilled. The book seemed underwritten. Too much was left unexplained. I felt like I'd missed something....

Several years later, I read an interview with Paul Zindel in which he commented, "CONFESSIONS OF A TEENAGE BABOON is a story so close to me that I almost had a nervous breakdown writing it. I pushed myself too close to the inner demons which drive me."

This intrigued me, so I went back and read the book again. A little older, a little wiser, and a little less naive, I now found myself questioning why the adult Lloyd hung out only with young people. And I wondered more about his relationship with his teenage friend Harold. When I read the book the first time, Mrs. Boyd's late-in-the-novel accusation that Lloyd had been inappropriate with neighborhood boys seemed baseless...just something she angrily tosses off to get Lloyd in deeper trouble during the book's frantic conclusion. Now I wondered if there was any truth to it.

In April 1989, New York's Circle Repertory Company presented a new play by Paul Zindel called AMULETS AGAINST THE DRAGON FORCES. I did not know until years later that this play was based on his young adult novel CONFESSIONS OF A TEENAGE BABOON. There are some differences between the play and the book. The book was contemporary in 1977 (a character is shown watching ALL IN THE FAMILY on TV), whereas the play is set in 1955. Rosemary, the girl whom Chris falls for, or claims to fall for, in the book only has three words of dialogue in the play ("Hi, I'm Rosemary.") In this version Chris is a puppeteer who tells stories using handmade figures and Lloyd's name is now "Floyd." Although the drama doesn't end as tragically as the book, much of the plot is the same. Yet the play tells us things that were only hinted at in the novel. Look at Lloyd's...er, Floyd's...hectoring of Chris in this version: "Your fingernails are fermenting. You slump! You take no pride in yourself. A boy's got to have pride. Jeez, you're cute when you're scared."

Whoa, didn't see that one coming!

In the play, we also actually witness Harold sleeping in Floyd's bed (Chris: "How long have you been letting him do stuff like that to you?" Harold: "I figured you knew I used to hustle.") And in this version, Floyd's relentless criticism of Chris is aimed at helping a sexually-confused teenager toward self-acceptance. (There's a reason that Rosemary, the novel's love interest, doesn't really have a role in this production.) So, unlike the book -- which ends with Chris holding hands with Rosemary -- the play ends with Chris confronting Floyd: "Mr. Dipardi, I want to learn how to love...whoever I love...I don't want to be ashamed and angry like you," to which Floyd responds, "M'boy...that part of you you don't like so much... don't be so afraid of it. Someday it may fit you more kindly..."

Considering that both BABOON and AMULETS basically share the same plot, the difference between novel and play is staggering.

Of course they are two separate works and should be viewed as such. Perhaps Mr. Zindel completely reconceived the story for the stage, choosing a more adult approach for a more sophisticated theatre audience.

Yet when I see how neatly the scenes from AMULETS would fit into the BABOON narrative, I suspect this was what was the author was implying all along. And what I sensed was "missing" from the story all along. 1980 was a long time ago and even in today's more open times it would be shocking to include a pedophile as a mentor in a young adult novel.

Reading AMULETS AGAINST THE DRAGON FORCES not only made me discover hidden depths within CONFESSIONS OF A TEENAGE BABOON. It also makes me wonder what unspoken themes are submerged just beyond the surface of other books I've read.
Posted by Peter D. Sieruta at 9:42 AM

I am old enough to remember people insisting that "nurd" was the correct spelling and that Doonesbury and Happy Days (remember Joanie calling Potsie "Dren" because she thought he wasn't a nerd after all?) had thrown everyone off.

I have a very very vague memory that I might have read this book, based on your description. I don't think I understood it well either. Interesting post and comparison of the two works.

I remember seeing nerd/nurd spelled both ways, too.

I really liked Zindel's books when I was a teenager, but never read I Was A Teenage Baboon.

I liked this content/ article. I would certainly recommend the same to others as well. from: http://www.picturebite.com

I'm always curious about the evolution of writers' work over decades, and Zindel's passage from The Pigman to fluffy (well, gory) page-turners like Reef of Death, 30-some years later, is no exception. Your analysis of Confessions vs. Amulets is absolutely fascinating. Thanks again for another intriguing article.

At my Midwestern Methodist college in the early 80's, I played "Nanny" in THE EFFECT OF GAMMA RAYS ON MAN-IN-THE-MOON MARIGOLDS. I had no lines, used a walker and drank weak iced tea (beer). My make-up took 2&1/2 hours to do, though!!
What a great memory you've revived for me! Thanks