Nearly everyone has written a short story for a school assignment.

But how many of those short stories go on to win a prestigious O. Henry Award and help the author invent a new genre of fiction?

It happened to a young girl named Maureen Daly, who was born in Ireland, grew up in Wisconsin, and was later hailed by no less than Richard Peck as "the spiritual grandmother of the young adult novel.”

Maureen Daly was only fifteen when she wrote her first story. It was titled "Fifteen." It went on to win third place in Scholastic Magazine's short story contest. Years later, Ms. Daly could barely recall the plot, saying it concerned a girl "who sees a boy ride by on a bicycle...and thinks of him. That is all I remember of the story and I do not have a copy."

When she was sixteen, the author wrote another short story. This one was called -- what else? -- "Sixteen." Written in less than ninety minutes, "Sixteen" is a monologue in which the narrator spends an evening ice-skating with an intriguing stranger and then futilely waits for his phone call. This time Maureen Daly won first-place in the Scholastic contest. Due to responsibilities at school (including a role in the class play), Maureen did not go to New York to receive her $50 prize or read her story on the radio. She described what happened next as "tense and awkward, something never forgotten":

When the fifty-dollar prize money arrived from Scholastic magazine, my mother signed my name on the check, cashed it, and bought herself a dress costing exactly fifty dollars, a high price at that time, at an exclusive women's shop called Minnie Messing's. I remember clearly the dress was a soft silk in a color known as "powder pink," with a matching jacket in heavy lace.

But Maureen Daly had the last laugh. "Sixteen" went on to win an O. Henry short story award and, since its original publication in 1938, has appeared in well over 300 anthologies.

The following year Maureen went off to college and, upon returning home for the summer, announced to her family that she was going to write a book. Working in a basement coalhouse, she spent that summer writing the first four chapters of her novel, and continued working on it during school breaks -- finally completing the manuscript during her senior-year Christmas break. She then submitted SEVENTEENTH SUMMER to a Dodd Mead contest whose prize was publication plus $1000.

Not only did SEVENTEENTH SUMMER win the contest -- it became a big bestseller. 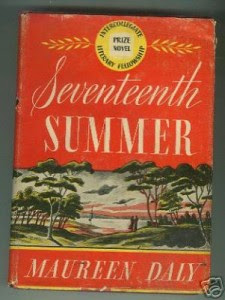 Published in 1942, the book has never been out of print. I wish I had pictures of all its cover images over the years; they'd certainly represent the cultural zeitgeist of every era. For now, let's just compare the original demure dustjacket illustration from 1942, shown above, with the current paperback featuring those up-to-the-minute (albeit overused) motifs of headless teens and barefeet! How many kids picking up the book today will realize it was originally published nearly seventy years ago? 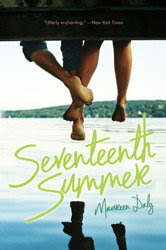 Though published as an adult novel, many credit SEVENTEENTH SUMMER with being one of the first modern "young adult" books. Daly said her book "proved to the publishing world and writing world that a lot of money could be made in the YA market. Many talented writers turned to writing for adolescents, and they have had distinguished careers. It opened up the minds of librarians and teachers even further to the fact that young adult literature could be true literature."

At heart, Daly's story is a protypical YA novel -- girl meets boy, they share a season together, then part at the end of summer -- written in the breathless voice of a girl experiencing romance for the first time:

And it wasn't puppy love or infatuation or love at first sight or anything that people always talk about and laugh. Maybe you don't know just what I mean. I can't really explain it -- it's so hard to put in words but -- well, it was just something I've never felt before. Something I'd never known. People can't tell you about things like that, you have to find them out for yourself. That's why it's so important. It was something I'll always remember because I just couldn't forget -- it's a thing like that. It happened this way....

The fact that Daly based the protagonist and her sisters on herself and her own family may account for the book's feeling of authenticity, as does the very real first-person voice of the seventeen-year-old narrator.

One of the ironies of this "first modern young adult novel" is that is breaks many of the "rules" later imposed on the category of young adult fiction. Though Angie's and Jack's romance is chaste, Daly readily admitted that "there is a strong sexual beat all throughout the book." Many readers misinterpreted a scene in which the couple leave a barbecue cookout and wander off into the woods; some librarians even reported that those pages were torn from the book by thrilled teens who read more into the story than Daly intended. When young adult fiction became a separate genre, it was generally not that sexually-charged. Nor would the characters in romances by early YA writers such as Betty Cavanna and Rosamond Du Jarden smoke and drink the way Daly's characters do. There's even a brief reference to homosexuality in SEVENTEENTH SUMMER, and YA literature didn't broach that topic again for thirty more years.

Due to the huge successs of her book, one might have expected Maureen Daly to keep writing in this genre, moving from "Fifteen" and "Sixteen" and SEVENTEENTH SUMMER to young adult books about eighteen and nineteen year olds. But after the publication of her groundbreaking book, Ms. Daly focused on writing for newspapers and magazines. With her husband (whom she met when he bought a copy of SEVENTEENTH SUMMER at a Marshall Fields book signing, then returned to the store after losing the first copy in a cab), Daly roamed the world writing travel pieces, doing celebrity interviews, and even writing episodes of KOJACK and other TV series. Along the way she also wrote a few forgettable children's books, published a volume of teenage short stories (SIXTEEN AND OTHER STORIES which contains her Scholastic winner and is padded by an excerpt from SEVENTEENTH SUMMER) but steered clear of the now-burgeoning field of young adult novels.

Then, in 1983, Ms. Daly's husband died of cancer. A few months later, her daughter Megan -- married with two young sons -- learned she also had cancer. She died just a few months later and Maureen Daly was "back where I was when I was seventeen, alone with a typewriter, but more alone."

Too depressed to work on any of her planned writing projects, Ms. Daly experienced a "mystical" moment when some friends took her on whale-watching trip. Viewing the interactions between a mother whale and her baby inspired and revitalized the author and when she returned home she began writing the story of another seventeenth summer: her daughter Megan's seventeenth summer. Back when Megan was seventeen, Daly and her family were living on a forty-acre farm in Pennsylvania and the government wanted to run a six-lane highway right through the middle of their land. Using this as one of the novel's main conflicts, Daly brought Megan back to life in the character of Retta, experiencing her own first summer romance. Writing the book ACTS OF LOVE was, in itself, an act of love for the grieving mother. 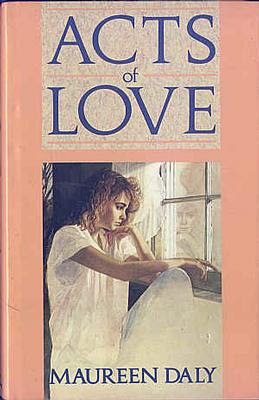 Daly's second novel about teens was well-received, but didn't have the lasting impact of her first. It is now long out of print. But it remains a noteworthy achievement that, forty-four years after SEVENTEENTH SUMMER, Daly finally, officially, entered the field of young adult novels that she had helped create.
Posted by Peter D. Sieruta at 9:54 AM

This is impossible! I have been informed by NUMEROUS blog posts that YA fiction was invented in the 1990s.

I remember when my editor at Scholastic, Ann Reit, coaxed that novel from Maureen Daly. She encouraged Maureen to come out of "retirement."

I love the stories you tell about authors I have known for a long time, but never knew well. Bravo!
Oh, and can I put in a plug for a newish book? "Crunch" came out in March and I just got around to it and LOVED it. (I am not connected with the author or the published in any way, just really enjoyed it and am trying to spread the word to other children's fiction appreciaters.)

i like the stories you told about the authors.They are quite interesting

Huh. And here I thought S.E.Hinton started it all with THE OUTSIDERS. Well, good for Maureen Daly. Too bad she's no longer around to read your lovely article.

I second ChrisinNY's praise of CRUNCH by Leslie Connor (author of one of my favorite MG novels, WAITING FOR NORMAL). CRUNCH is timely -- it's about a bike repair shop doing a booming business during an oil shortage -- and the siblings have to handle the shop on their own because Mom and Dad are stuck in Canada. We probably should have mentioned this in your Brunch post, because it would make a great companion novel to THE NOT-SO-GREAT-DEPRESSION.

That was pretty Mommie Dearest of Maureen Daly's mother to endorse the check in her own name and buy that dress!

I collect teen girl novels from
that era and I wrote about 17th Summer on my blog (The Paris Hat) as the originator of the genre, hoping I could get some people to read it. It really blew me away when I read it...so lush and descriptive and far more sexual than you would think. (I didn't catch the reference to homosexuality, though.) I really wish Daly had written more in that vein.

Love your blog. I have hummingbirds year round here in the desert and let me tell you they are NOISY (high pitched chirps) and will pester the life out of you if they think you are interfering with them.

In college, I was taking an Oral Interpretation course involving public speaking. The professor criticized my Midwestern accent. Inspired by Maureen Daly's monologue "Sixteen" about a short romance at an ice skating rink, I did an oral dramatization of the story for the final project and wowed the class. Got an A. I have always loved Maureen Daly's style and use of words.