A Blog Paved with Good Intentions

Thanks to everyone who read and commented on my last blog. I really appreciated hearing from you!

When I wrote that blog, I fully intended to be "back in business" very soon -- perhaps posting one or two more entries later that week. And I intended to have photos of my "library" to include in today's blog.

Well, as Charles Wallace says in A WRINKLE IN TIME, "The road to hell is paved with good intentions."

I always loved that line. First, as a kid, for the thrill of seeing a "bad word" in a Newbery-winning novel. But even more than that, because the saying is so true. I'm always planning to get things done in time, but there always seems to be a slip between intention and execution.

In other words: I'm still living out of bags and boxes, some of my books remain unshelved, and I'm still behind, behind on everything.

It doesn't help that the washer and dryer are broken. Maybe I'm not having as much trouble with them as Ramona did: 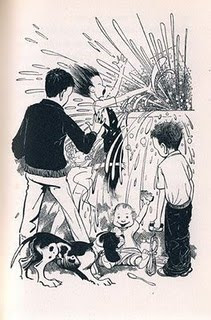 but it's still a pain dragging bags of dirty clothes to the laundromat every couple days. Now you're probably wondering why I'm going to the laundromat instead of just buying new appliances. Well, I did go to the store and order a new washer and dryer but was told they wouldn't arrive for a month! "A month?" I gasped -- and the saleswoman said one sometimes has to wait one to four months for a dryer these days. So I ended up ordering them from a different department store, where the wait is "only" ten days. They'll be arriving this Wednesday, which means I have to hit the laundromat again this afternoon -- or go out and pound the clothes against rocks in the duck pond!

Everyone likes an O. Henry story -- a fast-paced tale with a neat ironic twist at the end.

For decades I have not had enough space for my book collection. All my volumes were stacked sideways, with two rows of books per shelf as if they double-parked cars. I had boxes of books in the basement, and eventually rented a storage locker to accommodate the overflow.

I can't tell you how many books I gave away to the library because I just didn't have enough space for them.

If you have been reading this blog, you know that I just moved and had shelves built all around my basement. At last I have space for my book collection! As I've been filling the shelves, I'm amazed to see how my books have been "swallowed up" by the room. My book collection looks positively PUNY now, with yards and yards of empty shelve space everywhere.

On the one hand, that's good news. There is plenty of space for my collection to grow in the coming years.

On the other hand, with a mortgage to pay every month, a monthly home owner's association" bill to pay, a new washer, a new dryer, last week's new toilet...and all the other costs with associated with home owning...I'm dead broke.

So now I have all the space in the world for new books...


GOING WITH THE FLOW

The oil leak in the Gulf continues -- and who knows how it will end. No doubt this tragic event will be chronicled in many future children's books. For now, though, young readers who want to learn more about the effects of oil spills on our environment may want to track down the following titles at the library: 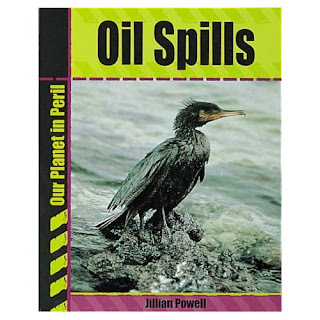 Markle, Sandra. AFTER THE SPILL : THE EXXON VALDEZ DISASTER, THEN AND NOW. Walker, 1999.

Sepulveda, Luis. STORY OF A SEAGULL AND THE CAT WHO TAUGHT HER TO FLY. Scholastic, 2003.

Streissguth, Thomas. THE EXON VALDEZ : THE OIL SPILL OFF THE ALASKAN COAST. Capstone, 2000.

I was sorry to learn that Ruth Chew died reeently at age 90.

Trained as a fashion artist, she eventually turned the stories she told her own kids into children's books. Her first novel, THE WEDNESDAY WITCH, was reportedly rejected by ten publishers before being issued in paperback by Scholastic in 1968: 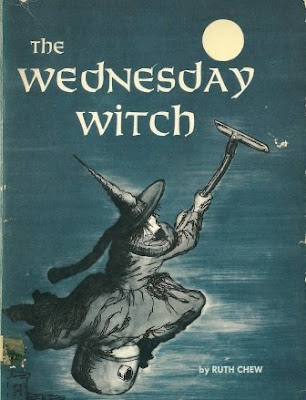 Despite all those rejections, it became an instant reader favorite (editors, take heed! writers, take heart!) and was eventually published in a hardcover edition by Holiday House.

Does anyone know of any others children's and young adult titles that transitioned from paperback to hardcover? I imagine it happens a lot with self-published books that are eventually picked-up by major publishing houses, but it's pretty rare otherwise.

I think that Julian Thompson's GROUNDING OF GROUP SIX was first published in paperback, but became so well-known that a hardcover edition later followed.

The winners of the Boston Globe-Horn Book Awards were announced this week. The winning titles were:

Fiction: WHEN YOU REACH ME by Rebecca Stead
Honors: THE DREAMER by Pam Munoz Ryan
A CONSPIRACY OF KINGS by Megan Whalen Turner

Picture Books: I KNOW HERE by Laurel Croza; illustrated by Matt James
Honors: THE LION AND THE MOUSE by Jerry Pinkney
IT'S A SECRET! by John Burningham

The BG-HB Awards are interesting in that they honor English-language books not just from the U.S. but from countries such as England and Canada as well. Plus, since the award's time frame does not cover a calendar year, but goes from summer to summer, the winning books sometimes echo previous awards (as they did this year when the Newbery winning title, WHEN YOU REACH ME) or give early recognition to a book (such as MANIAC MAGEE) which will go on to win the Newbery later.

I believe only two children's books have ever won all three of the major books awards -- the Newbery, the National Book Award, and the BG-HB. They are M.C. HIGGINS THE GREAT by Virginia Hamilton and HOLES by Louis Sachar.

Over the years, there have been a few odd winners -- books that were not recognized by other committees and, in fact, are now long forgotten.

One of my favorites from that category is THE LEAVING by Lynn Hall, a quietly-powerful book that hardly anyone remembers these days: 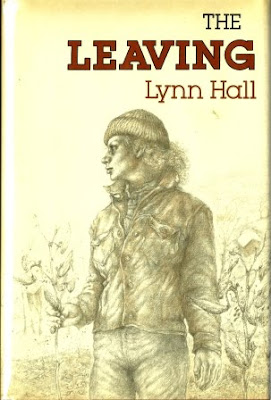 I'm glad that author Lynn Hall, who never got the kind of praise she deserved, won a major prize like this once in her career.

Several years ago the Horn Book sold their collection of books to a dealer, and I scurried to "rescue" as many of them as I could.

I ended up with the Horn Book's original review copies of many of the winning titles -- many of them signed by the honored authors at the BG-HB ceremony.

For example, I have the very first winner, THE LITTLE FISHES by Erik Haugaard: as well as RABBLE STARKEY, signed by Lois Lowry: 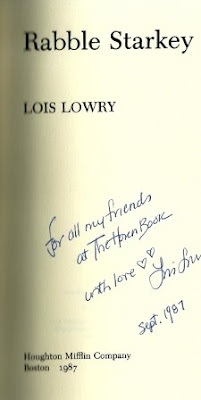 Also have a copy of A LITTLE FEAR, signed by author Patricia Wrightson, who came all the way from Australia to accept her award.

I've never had much of a green thumb but, since moving, I thought that one way to stretch my budget would be to grow some vegetables, rather than buy them at the store.

Unfortunately, we're not allowed to dig up a garden here, so I have to work from containers. I'm growing leaf lettuce, peppers, cucumbers, and beets.

I'm also growing four (well, one of them died, so I guess I'm down to three) tomato plants: 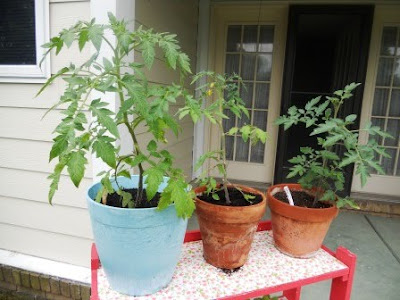 Every time I go out to water them, I think of Ramona Quimby who, when she wasn't busy breaking washing machines, once tried to cheer her father up by joking about eating "tommytoes."

As she belabored the joke, repeating the phrase "tommytoes" a couple more times, Mr. Quimby said, "Ramona...my grandmother used to have a saying. First time is funny, second time is silly, third time is a spanking."

So as I'm watering my tommytoe plants and whispering encouragement to them ("Come on, little tommytoe plants...grow strong!") I always make a point of only using that phrase twice. Otherwise...smack!

I understand that Mrs. Quimby packs quite a wallop with that pancake turner!

Thanks for visiting Collecting Children's Books. Hope you'll be back!
Posted by Peter D. Sieruta at 1:40 PM

Peter, good luck getting caught up with everything. Don't beat yourself up. Moving is hard.

Anyway. I Know Here. I Know Here? This is one of Those Moments That Makes Me Feel Like a Big Poseur for thinking I know anything at all about picture books. Haven't even HEARD of it. I've at least requested it from the library. It's on order.

And P.S.: I'm always happy to see John Burningham get a nod. Love his books.

It's so exciting to have a book handy which has escaped your notice.

I refer of course to that classic of Oil Spill Fiction: "The Great Gulper."
Written by Jim Slater. illustrated by his 10-YEAR OLD SON and published by Random House in 1979, apparently as part of a series called A. Mazing Monsters. (Depsite the pun, there are no mazes. Instead there is a guy named A. Mazing.)

The Great Gulper looks like Chewbacca and can drink thousands of gallons of oil in one go.

I'm glad that you finally have room for all your books and room to grow.

I will have to look for the Lynn Hall book. I loved her book The Shy Ones, read it over and over (even though I have never been a fan of "dog books," as a rule), but haven't read any of her many other books.

I have containers too (second-floor apartment): cilantro, strawberries, and tomatoes. This year I bought a blueberry bush, hopefully--and it has two green blueberries on it right now! My daughter is thrilled.

I am a bit stunned by your mention of the Horn Book selling off its collection. But what lovely books you added to yours.

Garth Nix's series that started with Mr. Monday originated in paper. It wasn't until book 3 that they were done in hardcover.

I'm sorry to hear the news about Ruth Chew. I LOVE her books. Her unadorned, active writing style inspires me.

Good luck with your container garden! My whole garden is in containers, too. I ordered three kinds of tomatoes and two kinds of peppers from White Flower Farm this year, and so far they're flourishing.

I am looking forward to seeing your library. Hope you are all settling in well, despite the lack of laundry facilities.

Re too many books, I know the feeling. Half my tiny rented room is filled with stacks of books, and I dream of the day when I'll have enough space to display them all! I think it's great that you have more than enough space for your books now, even if you can't add to them at present. :)

I don't to say great thanks but it is for you. You are collecting children's books good think for our next generation. The preferred element to build a perfect future.