The principal then led her to class. The room was large, with windows up to the ceiling. Row after row of students, each one unlike the next. Some faces were white, like clean plates; others black like ebony. Some were in-between shades. A few were spotted all over. One boy was as round as a water jar. Several others were as thin as chopsticks. No one wore a uniform of blue, like hers. There were sweaters with animals on them, shirts with stripes and shirts with squares, dresses in colors as varied as Grand-grand Uncle's paints. Three girls even wore earrings. 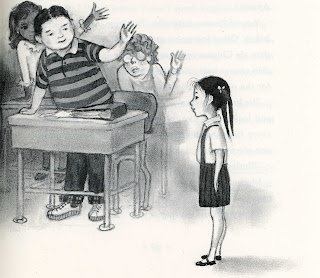 While Shirley looked about, the principal had been making a speech. Suddenly it ended with "Shirley Temple Wong." The class stood up and waved.

Amitabha! They were all so tall. Even Water Jar was a head taller than she.

Shirley bowed deeply. Then, taking a guess, she replied, "Hi."

IN THE YEAR OF THE BOAR AND JACKIE ROBINSON concerns a young Chinese girl who arrives in the United States on a Sunday afternoon and begins attending Brooklyn's P.S. 8 the very next morning. Although she's unable to speak English and doesn't understand western customs, Shirley soon develops new friendships and a passion for that most American of sports, baseball, in a story that celebrates both cultural assimilation and staying true to one's heritage.

Bette Bao Lord's only children's book has become a perennial favorite among young readers, due to its sympathetic, three-dimensional protagonist, its time-honored themes of identity and adjustment, and its humorous, yet touching prose. Given the novel's verisimilitude, it's not surprising to learn the story is largely based on the author's own childhood experiences in the late 1940s. Ms. Lord has said, "I look back to those years of Americanization, learning English, going to P.S. 8, as a wonderful time of my life. I was a happy immigrant. A lot of credit has to go to my parents saying, 'Bette, you can go out into the new world, you can speak another language, you can become Westernized, you came come home to us and still everything is harmonized.'" Many of the characters and scenes from the novel were taken directly from the author's life, as when Shirley gets a pair of black eyes from the school bully, but refuses to tell her parents what happened. Ms. Lord recalled, "The new American part of me knew that I couldn't snitch. The old Chinese part of me knew that not obeying my parents' demand was unworthy. So they took me to an even higher authority--the police. But we were living in America and I kept my silence. It worked out fine. Later, the girl and I became fast friends." In fact, in the novel Mabel-the-bully is the character who ends up showing Shirley how to play ball.

I wonder what ever happened to the real-life Mabel.

We do know what happened to a couple other classmates. In the book, Shirley becomes good friends with a girl named Emily Levy, who introduces herself by saying, "I don't play anything but board games and charades. I read books, lots of them. I practice the cello two hours a day. My father's a psychiatrist. My mother's a committeewoman. I have two older brothers and sisters, and we are all progressives." In real life, her name was Emily Wortis, and she grew up to become the poet and biographer Emily Wortis Leider.

IN THE YEAR OF THE BOAR AND JACKIE ROBINSON also contains a secondary character named Irvie, a shy kid who's obsessed with spiders and afraid of girls. In the novel's biggest scene, the Dodgers win the sixth game of the 1947 World Series and "forgetting thirty-nine generations of Confucian breeding, Shirley hugged anyone in reach" while another girl grabs Irvie and "as he stood stiff as an icicle, she tap-danced about, nudging him with a shoulder, patting him on the cheek, closer and closer till they were nose to nose, and he fled into the street."

That's the last time we ever see Irvie in the novel, but I can assure you that he is not still running through the streets of Brooklyn. In real life, Irvie was actually the twin brother of Emily.

And it turns out that Emily and Bette were not the only kids from P.S. 8 who became writers.

Twenty-three years after he ran out that door, "Irvie" published his first book for kids, THINGS THAT SOMETIMES HAPPEN. Since then he's published dozens more -- historical stories, fantasies, realistic fiction, even a graphic novel. He's had a couple Newbery Honors (THE TRUE CONFESSIONS OF CHARLOTTE DOYLE and NOTHING BUT THE TRUTH) and finally won that award for CRISPIN : CROSS OF LEAD.

Wow! How do you find these things out? Now I have to go find a copy of that book. Thanks for all your wonderful posts.

What a great story, Peter! I just pulled Bette's book and a handful of Avi's off the shelves as I shared this with my 5th grade students. And last week we read Teammates, about Jackie Robinson and PeeWee Reese, so they knew a bit about the Dodgers:)

Thanks for sharing this.

This is a fantastic story, and a useful reminder of a book I'd forgotten about (shame on me). I teach in a bilingual classroom, and I'll definitely be bringing this one out to share with my students.

i love your blog more every single time i read it.

A good reminder of a good book.

As the person you mention in the story, Irvie, and the writer he became (Avi), you might be interested in knowing that one of my books--partly in homage to The Year of the Boar and Jackie Robinson-- is my own tale about PS 8. Called, Don't you know there's a war on? And yes, there's a Chinese girl mentioned in the book.

Wow, you are so cool Peter! I really look forward to what I'm going to find out next each time I see you've made a new post. Great story!

Oh! That is such a great tale. I've always loved In The Year of the Boar and Jackie Robinson, but I don't think I ever knew how autobiographical it was.

yay! I found something that talks about the book. I couldn't remember the name.When I was in the sixth grade we read it as a class.