Books That Went to the Dogs (and Cats)

Beatrix Potter once had a pet rat.

No, I didn't say C-A-T, as in that nice, but mischievous little "Tom Kitten," I said R-A-T...as in greedy Templeton from CHARLOTTE'S WEB...as in James Cagney sneering, "You dirty rat!"...as in Michael Jackson warbling to that rodent-with-roid-rage Ben.

Not everyone was fond of Miss Potter's pet 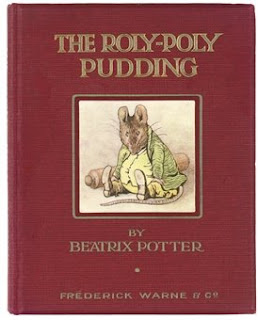 (the author once wrote about an elderly aunt "who didn't appreciate his friendly advances." Yeah, probably not...especially if he was crawling up her leg.) But Beatrix herself was quite smitten with the little guy. She wrote about Samuel Whiskers in her 1908 book THE ROLY-POLY PUDDING, and even dedicated the volume "In remembrance of 'SAMMY,' the intelligent pink-eyed representative of a persecuted (but irrepressible) race. An affectionate little friend, and most accomplished thief!"

I wonder if THE ROLY-POLY PUDDING was the first children's book dedicated to a pet. It certainly wasn't the last. Over the past century, many more pets have been celebrated and memorialized in dedications.

In 1994, Stephanie Calmenson wrote ROSIE : A VISTING DOG'S STORY, about her own Tibetian Terrier who was trained to visit children's hospitals and nursing homes; she dedicated the volume to Rosie. Seven years later, Ms. Calmenson published the picture book PERFECT PUPPY, which was illustrated by Thomas F. Yezerski, who dedicated the book "To Tiffy and Mickey." Mr. Yezerski said, "Both Stephanie Calmenson and I had real dogs in mind while we worked on PERFECT PUPPY. Stephanie’s dog Rosie is <...> trained to cheer up sad and sick people. My parents’ dog Mickey doesn’t have such an important job, unless stealing toast and socks is an important job. He was the dog I was thinking about. It wasn’t until after I started working on the book that Stephanie and I realized that Rosie and Mickey are both Tibetan Terriers! What a coincidence! I also dedicated the book to my family’s first dog Tiffy, because a lot of her personality is in the Perfect Puppy, too." 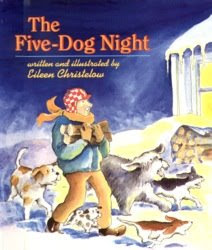 Author-illustrator Denise Fleming has also dedicated at least two of her books to favorite pets. MAMA CAT HAS THREE KITTENS (1998) is "for Abigal, my first cat" while BUSTER (2008) is dedicated to her dog Warfy. While writing THE FIVE-DOG NIGHT (1993), Eileen Christelow thought about the canines that had shared her life and dedicated the book "To five dogs past and present -- Johnny Bull, Gretchen, Casey, Ladi, Ophelia." The dedication of Bill Peet's 1970 picture book THE WINGDINGDILLY is simple and hearfelt: "In memory of a wonderful dog."

Authors often fictionalize real-life pets in stories...and then dedicate the books to them. Marguerite Henry dedicated MISTY OF CHINCOTEAGUE to several citizens of Chincoteague Island who appeared as characters in her book, ending with "a special dedication to Three Chincoteague Ponies: Phanton, Pied Piper, Misty." Betsy Byars' 1996 easy-to-read novel TORNADO features a cat named Five-Thirty (the narrator says, "It got the name because the cat used to come to our house every day at five-thirty to get something to eat.") Ms. Byars would later say, "The cat in the book, Five-thirty, is a real cat and I dedicated the book to him and his family." However, I noticed that the dedication is actually to a cat named "Nine-Thirty" so I guess she changed this feline's first name for the book...though she kept the same last name. 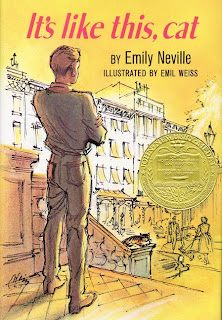 Phyllis Reynolds Naylor based the title character of her 1992 Newbery winner SHILOH upon "the saddest dog I ever saw" during a visit to West Virginia. Later some friends of Ms. Naylor's found the dog, took him in, and named him Clover -- and the book she wrote about him was ultimately dedicated to Clover. SHILOH isn't the only Newbery winner dedicated to a pet. When Emily Cheney Neville published her first book, IT'S LIKE THIS, CAT in 1963, she did not acknowledge her husband, her kids, or her parents. Instead she dedicated the book to the cat who shared her family's apartment in New York City: "To Midnight, the 'Mayor' of Gramercy Park, 1954-1962." (Sounds like he pretty much ran the neighborhood, doesn't it?)

Perhaps the most unusual "pet dedication" I've seen can be found in Gary Paulsen's MY LIFE IN DOG YEARS, 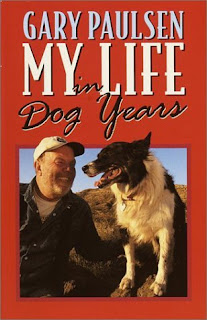 a memoir that introduces several canines the author has known and loved. What makes this dedication so fascinating is that it's seven pages long! In "Cookie: A Dedication," he talks about the special dog that led his team the first time that he raced the Iditarod. Once, during a beaver trapping expedition, the author fell through some ice and faced certain death -- until he was pulled out by Cookie and the rest of his sled dogs. Paulsen concludes: "That was in 1980. It is now 1997 as I write this, and everything that has happened in the last seventeen years -- everything: Iditarods, publishing books, love, living, life--all of it, including this book, I owe to Cookie."

We do owe a lot to our pets -- and since the time of Sammy-the-Rat, lots and lots of children's book have been dedicated to litters and litters of animals. Maybe some think it's silly to dedicate a book to a being that can't even read, but I don't necessarily agree. I'm thinking of this scene in Lois Lowry's ANASTASIA KRUPNIK: "The second book of poetry by her father <...> was called MYSTERY OF MYTH. Her father liked it. But her mother didn't like it at all. The reason her mother didn't like it at all was because on one of the inside pages it said, 'For Annie.' Anastasia didn't know who Annie was. She suspected that her mother did." This makes me think about all the books out there that are dedicated to husbands and wives that are now ex-husbands and ex-wives. Books dedicated to friends who are no longer speaking. I doubt that kind of thing ever happens after a book is dedicated to a dog or cat. Our constant companions, always loyal and faithful, our pets show their dedication to us every day of their lives.

Is it any wonder that some get Dedications back in return?
Posted by Peter D. Sieruta at 12:42 PM

Templeton is from Charlotte's Web not Stuart Little- they are both by the same author though. I just love reading dedications!

Ack! How did I make THAT mistake? My head was saying Charlotte and my fingers typed Stuart. Thanks for pointing that out. I've now corrected it.

Buy runescape gold as low Pirce! We never rest so that we can offer you the best. We're here 24 hours a day, 7 days a week. Get the most out of your game time and level with the best!

Just wanted to say HI. I found your blog a few days ago and have been reading it over the past few days.
air jordan shoes