Spending the Night in the Library

The library where I work is open fairly late at night. When I leave at 6:00 PM, the building is still buzzing with patrons studying in groups, tapping away at the public computer terminals, and checking out books at the circulation desk. The only exception is Friday night, when the library closes early. 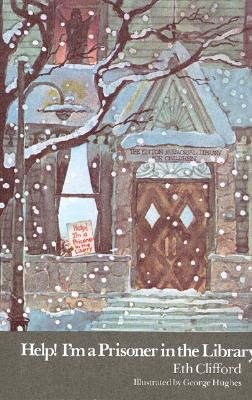 Starting at 5:30 PM, there is a succession of announcements on the loudspeaker (accompanied by ringing chimes!) warning patrons to “return all course reserve materials and check out all circulating items” before the lights are turned off. By the time I get downstairs on Friday evenings, the building is dark and the last few library customers are being shooed out the door. One Friday I made the mistake of getting downstairs at 6:01 PM -- sixty seconds after the official closing time! -- and was sternly warned “If you don’t get down here on time, we CAN and WILL lock you in the library.” “In which case I CAN and WILL throw a chair through the window to get out,” I replied. Okay, maybe I didn’t actually say that out loud, but I thought it. I also thought that there are fates worse than being locked in a library overnight. Over the years I’ve worked at nearly every conceivable hour -- late at night, before dawn, Saturdays, Sundays, holidays -- and in nearly every conceivable situation -- completely alone for an entire work day, in total darkness due to a power outage -- but the one thing I’ve never done is spend an entire night in the library. I think it would be fun. Apparently I’m not the only one with this fantasy. Eth Clifford’s HELP! I’M A PRISONER IN THE LIBRARY!, the story of two friends trapped in a public library during a snowstorm, remains in print thirty years after publication. Then there’s Elizabeth Enright’s 1939 Newbery winner THIMBLE SUMMER, 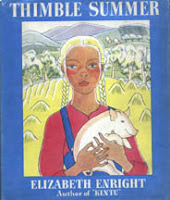 which includes an episode of farmgirls Garnet and Citronella hitching a ride into town, settling into a library windowseat with their books, and getting so caught up in their reading (Garnet with THE JUNGLE BOOK; Citronella, DUCHESS OLGA : OR THE SAPPHIRE SIGNET) that they fail to notice when the building closes. Enright does a great job setting the atmosphere and maintaining suspense. As twilight fades to night, the initial sense of fun (“This is an adventure. Things like this happen to people in books; we’ll be able to tell our children and grandchildren about it. I hope we stay here all night!”) turns to worry (“Do you know what day it is? Saturday! That means we’ll be here till day after tomorrow.”) and then outright fear as the library fills with deep shadows and they hear “airy scamperings of mouse feet”:

“Neither do I,” murmured Garnet. “I feel as if all those books were alive and listening.”

I particularly like their midnight rescue, followed by a meal at the town lunch wagon: “It was wonderful to go there so late at night and eat fried egg sandwiches and apple pie and tell everybody what had happened to them.”

Unlike Garnet and Citronella, coming up in the 1930s, today’s young people sometimes have the opportunity to legitimately spend all night in a public library. Every now and then I'll see an ad for an all-night kids party in a local lockdowned library. Unfortunately, I’m way, way past the age limit to attend such functions. But I have to admit, there are some Friday evenings when my library is closing for the night and I wonder...what would happen if I just didn’t leave? Let’s see...I’d need a blanket...change for the vending machines so I could have a midnight snack...and of course a flashlight so I could stay up reading all those books, all by myself, all night long.
Posted by Peter D. Sieruta at 10:10 AM

Peter, I know that this is a little out of the blue but what would you say would be the potential value of having a copy of the picture book "Angel Girl" by Laurie Friedman these days? Since it was recently pulled from all possible markets, do you see any potential resale value in having one of the few copies they sent out, or not so much? Not that I have one. It just piqued my curiosity when I heard that they were pulling the lot.

Thank you for another incredible blog. Where else might anyone get that kind of data written in such a perfect way? I've a presentation that I'm just now working on, and I have been on the look out for such information.

I think this is the perfect place to work because imagine while yo working you can read whatever you want, and learn a lot about different things.m10m

Elizabeth Enright is one of my favorite authors for re-reading; I too have dreamed of staying overnight (or over a three-day holiday would be great--if I had food supplies and a place to sleep & wash, shades of FROM THE MIXES UP FILES OF MRS. BASIL E. FRANKWEILER!)

Modern libraries, however, may mostly be equipted with motion detectors (maybe to safeguard expensive computers), reason why a local library eventually had to give away their resident cat. Downtown Los Angeles Civic Center library also had several severe fires thought to have been started by homeless men who broke in seeking shelter (it's near infamous Skid Row).

Photos of old Redondo Beach library under a historic massive (Morton Bay?) fig tree can be found online--I think it was a Carnege Library, like one described in Maud Hart Lovelace's BETSY AND TACY GO DOWNTOWN, another favorite library visit in autobiographical fiction.

P.S. I worked in both libraries and bookstores and must reply to common misbelief that working with books includes unlimited reading on the job--in fact, I was repeatedly reprimanded for looking inside the books... :-(