Many years ago my entire family went to New York and saw the final play in Neil Simon’s autobiographical trilogy, BROADWAY BOUND. It was a great production, highlighted by Linda Lavin’s amazing performance as the down-to-earth mother who still dreams about the long-ago night that she danced with movie star George Raft.

After the play was over, we happened to see Linda Lavin leaving the stage door. My brother asked if she’d sign his Playbill, but she ignored him and kept walking. He called after her, “I guess that means ‘no’?”

Lavin turned around, rolled her eyes, grabbed his program, and signed it -- with her initials!

Or at least it looked that way. There was an L followed by another L ...though the second letter had a little flourish after it that MIGHT have meant “Lavin” if “Lavin” was spelled “L____.”

Just a couple years earlier, she’d been slinging hash at Mel’s Diner, but now she was a Broadway STAR and didn’t have the time or the patience for good penmanship. Or for her fans.

But this isn’t a story about actors (so you can kiss my grits, LL____!) but instead a tale of authors who have illegible handwriting. I have to admit, most of the signed books in my collection are inscribed with excellent, even beautiful, handwriting. But there are one or two authors whose signatures make even LL____’s penmanship look good. Can you figure out the signatures of the two Newbery medalists below? 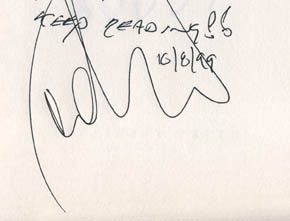 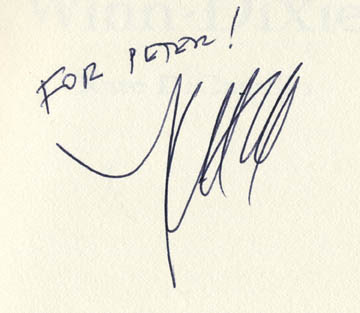 I’ll include the answers at the end of today’s blog.

Did you know that Will James, the Newbery-winning author of SMOKY THE COWHORSE (1926), once worked as a film extra in early westerns? Or that there was a 1933 movie adaptation of SMOKY, which he narrated himself -- as well as a 1946 remake starring Fred MacMurray, Anne Baxter, and Burl Ives? Or that he was the subject of a 1988 documentary called ALIAS WILL JAMES?

The more I learn about about this cowboy/author/artist, the more I think someone needs to write a full-scale biography about him. Will James seems to have reinvented himself over and over again during his short but busy life. Some sources say he was born in Montana as “William Roderick James,” when in truth he was Joseph Ernest Nephtali Dufault of Quebec, Canada. I think I can say with certainty that he was the only Newbery winner ever to serve time in a Carson City, Nevada jail for cattle rustling...and the only one to work for the rodeo. In fact, every time the rodeo came to New York and paraded down Fifth Avenue, they’d make a special stop outside the Scribner Building, so James could wave at his publishing friends inside.

SO YOU DIDN’T SEE THOSE MOVIE VERSIONS OF SMOKY...

...but did you see the film adaptation of Scott O’Dell’s THE ISLAND OF THE BLUE DOLPHINS? 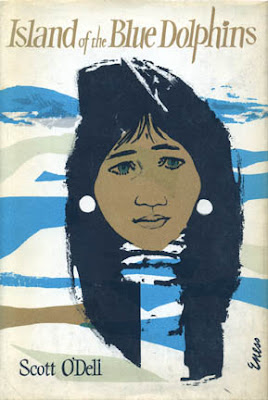 Long-considered one of the best-written Newbery winners of all time (though I get the feeling the book isn’t as popular these days as it once was), O’Dell’s novel was made into a 1964 film starring someone named Celia Kaye (also not as popular these days as she was once was.) Although my family attended only one or two movies a year when we were growing up, we actually went to see this one -- at a drive-in theatre, no less. I remember almost nothing about it; I think I fell asleep in the backseat. I’d blame that on being just five at the time, but apparently nearly everyone found this movie mind-numbing. I found two professional reviews on the Internet Movie Database (www.imdb.com.) One called the film “bland.” The other went a little farther, stating: “This film is a lifeless vacuum of blandness. It is probably the most bland film ever conceived. Watching it made me want to burn the negative along with anyone involved in the production that is still alive....” This reviewer also says -- and, no, I’m NOT making this up --“Everyone involved has a good chance of being the anti-Christ.”

Think he liked it?

Well, you know critics are always a little picky. What do regular viewers say? One person wrote in to say, “The greatest family movie ever made! The acting and ending is a WOW!!!!” Another deemed it “great for insomnia” but said that he really liked Celia Kaye’s leather slit-skirt, adding “hubba-hubba” in case we didn’t get the point.

Here’s a picture of the movie’s original advertisement. You may have to click on the image to see the slit-skirt, I mean the ad, in better detail: 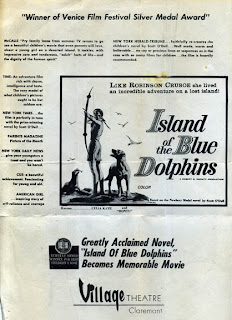 Incidentally, this advertisement was folded and glued into the back of my copy of ISLAND OF THE BLUE DOLPHINS. On the reverse side of the ad is a huge picture of Scott O’Dell, signed in blue ink by the author. The back endpapers have remnants of other articles once glued inside and I mourn the fact that they are now missing. My book was also inscribed: 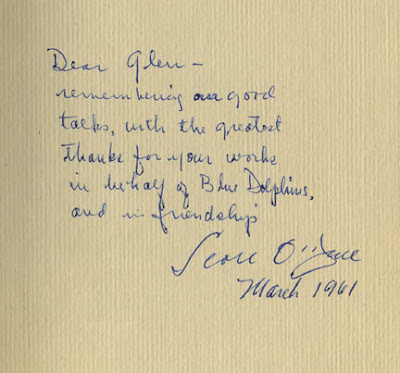 I wonder who Glen was and what role he had in the creation of this book? I used to ask such questions idly, but now that I’m addressing them into cyberspace, I halfway expect to receive an answer. Just the other day I wrote a blog entry about Jennie D. Lindquist and got a note from one of the late author’s relatives. Maybe Glen, or someone in his family, will read this blog and let me know his connection with Scott O’Dell and ISLAND OF THE BLUE DOLPHINS.

Little Audrey was a cartoon and comic book figure who always tried to make the best of a bad situation, as does her namesake in Ruth White’s new novel LITTLE AUDREY. 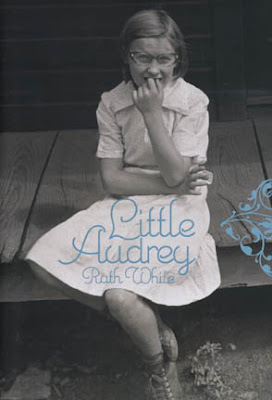 I usually like Ruth White’s novels and thought last year’s WAY DOWN DEEP was nothing short of brilliant (I still want a recount from the Newbery committee so that White’s book and Lauren Tarshis’s EMMA-JEAN LAZARUS FELL OUT OF THE TREE can get some kind of delayed Honor Book status...call it the “Oops, We Forgot Award.”) LITTLE AUDREY is a bit thinner than WAY DOWN DEEP and suffers from a rushed ending that ties things up too quickly, but it’s still a thoughtful and emotionally-involving story about the lives of an impoverished coal-mining family in 1948 Virginia. This book felt very personal to me, as my grandmother came from Virginia and used the same dialect as Audrey (“worsh” for “wash”) and I also recognize many moments in the novel from stories I’ve heard about my own family’s underprivileged background -- recalling a time when a banana was a rare treat and kids were afraid to ask their penniless parents for school supply money.

I’m also fascinated by the fact that the author wrote this book in the voice of her oldest sister Audrey (White herself appears as little sister Ruth Carol), especially since those of us who read her earlier book MEMORIES OF SUMMER know the troubled fate of the real-life Audrey. I wonder if this book was an attempt to show a different side of Audrey, before her problems began, or if it’s an ATONEMENT-like version of what Audrey’s life could have, or might have, been. Whatever the case, it’s a strong book and fans of Ruth White’s work will not be disappointed in LITTLE AUDREY.

The mining camp water tower is one of the central motifs in LITTLE AUDREY and I was reminded of how often water towers have been showing up in children's and young adult books lately. I wonder what that's all about. Just in the past couple years we've had GODLESS by Pete Hautman, LAST DANCE AT THE FROSTY QUEEN by Richard Uhlig and FAR FROM XANADU by Julie Anne Peters. Are there any other recent literary water towers I'm forgetting?

BACK TO THE BEGINNING

Did you figure out who signed my books? Here’s the answers: 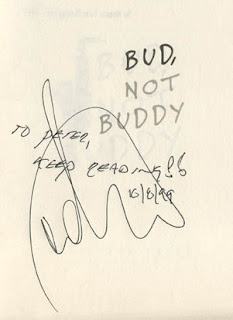 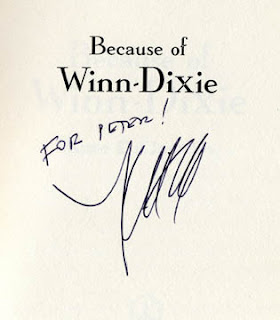 Even KNOWING who signed them, I can’t make those scrawls out to be “Christopher Paul Curtis” or “Kate DiCamillo.” But that’s okay. Even if their signatures do resemble chicken scratch, the books themselves are wonderful and I’m thrilled and honored that the authors took the time to sign them.

Besides, I actually know another person with EVEN WORSE handwriting than these two authors.

I am so with you on Way Down Deep and Emma-Jean....