Tails from the Ramsey Room

Every day, as I walk back and forth through the Ramsey Room stacks, I am greeted by this sight: 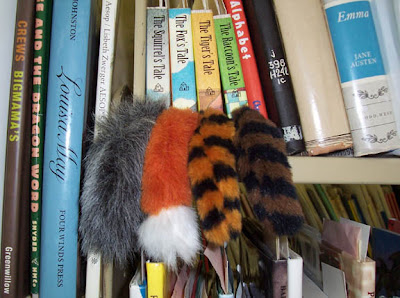 No, the library has not suffered an infestation of wild critters. These are four volumes I donated to the Ramsey Collection. Many years ago, when I used to review children's books for a small magazine, I'd often come home to find a big box full of review books waiting on the porch. I'd drag it inside, then make a big production out of s-l-o-w-l-y opening the box and s-l-o-w-l-y drawing out the books one by one...never knowing if I was holding the Stinker of the Year or the next Newbery winner in my hands. I'll never forget the day I reached into the box and my hand grabbed onto SOMETHING FURRY! It's funny how fast one's mind works in this kind of situation. Before I even let go, I'd already convinced myself that some wild animal had gnawed its way into the cardboard box and crawled inside to die. As I jerked my hand away, it scraped against the jagged edge of the box. Feeling the sting, I thought, "Oh no. I've been bit."

Then I peered into the box and saw what I had touched. Four rather innocuous board books that happened to have tails: 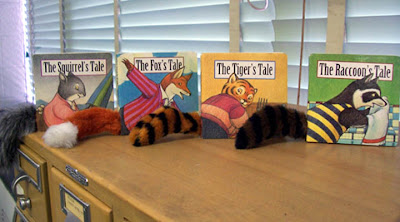 Written by Graham Percy and published by Random House in 1994, these gimmicky volumes ended up in the Ramsey Room not because they are rare or valuable, but because they represent an oddity in the history of children's literature that should be preserved for future students and scholars to study. ...Speaking of historical oddities, see that piece of furniture under the books? It's what we used to call a "card catalog" -- another piece of the past being preserved in the Ramsey Room.

Written by Margaret Wise Brown and illustrated by Garth Williams, LITTLE FUR FAMILY was published by Harper in 1946. The tiny book (only 3x4 inches) is bound in real rabbit fur. Nestled inside a box with a diecut hole, the fur adds both an illustrative and tactile feature to the box: 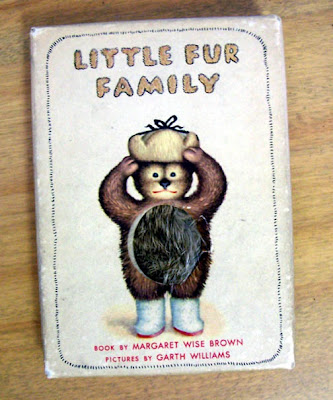 Here are the box and book side by side: 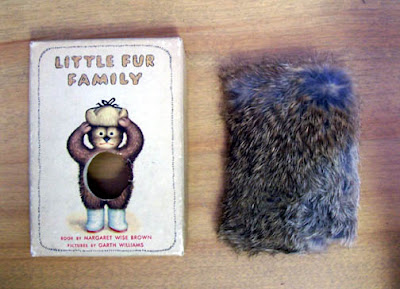 And a look inside the volume: 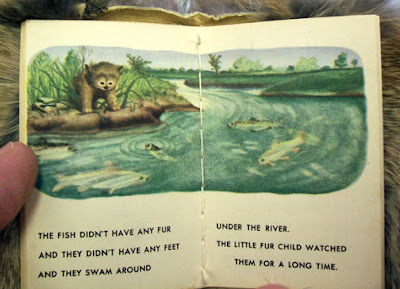 This was an expensive book to produce and some sources indicate it wasn't the financial success that Harper expected. Some say the furry binding scared kids. (Imagine being scared of a book with fur! ...Never mind.) The rabbit fur on our copy has held up extremely well and remains amazingly soft to the touch sixty-two years after publication. In fact, much like Lenny in OF MICE AND MEN, I couldn't stop myself from stroking the soft cover over and over today whenever I took a break from working.

In recent years, Harper has published some ridiculous reprints of this volume. One is 6x8 inches -- double the size of the original -- and the "fur" appears to be that synthetic stuff used on cheap "plush" toys. Another edition is clean-shaven, with not a strand of fur on it. It seems unlikely that there will ever be another book bound in authentic rabbit fur.

The Runaway Bunny, Peter Cottontail, and the Velveteen Rabbit are probably happy about that.

Because of its unusual rabbit fur binding.

Because both the author and illustrator are highly collectable.


How to identify a first edition:

I'm not sure if this book ever went to later printings, nor do I know the original price. The title page contains the words "Copyright 1946."


Difficulty in finding the books:

Dear Genius: The Letters of Ursula Nordstrom mentions this book and states that many copies deteriorated due to poor storage. Later editions of the book used fake fur. It's still available on Amazon.com and through used booksellers.

By the way, I love your blog and I want to visit the Ramsey Room someday!