A discussion about presentation copies of children's and young adult books sent me to the shelves to grab one of my favorite examples: THE YEAR IT RAINED by Crescent Dragonwagon. Then, as I stood holding the book, I remembered what a polarizing novel this is.

The children's book world is full of titles that almost always evoke a love 'em or hate 'em response. Though directed at a much (much) older audience and not nearly as well-known as the aforementioned books, THE YEAR IT RAINED is another of those volumes that some readers cherish and others despise. 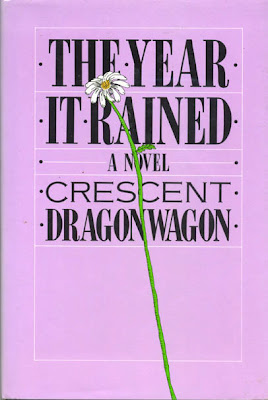 I must admit, I was first drawn to this young adult novel because of its "family pedigree." Crescent Dragonwagon is the daughter of Hollywood biographer Maurice Zolotow and the brilliant children's book editor Charlotte Zolotow. Elizabeth Stein, the seventeen-year-old protagonist of THE YEAR IT RAINED is the daughter of a Hollywood biographer father and a brilliant children's book editor mother. I expected the novel to be a roman a clef, providing an inside look at Charlotte Zolotow and her stable of writers -- and I was not disappointed. As I read the novel, I was fascinated by the multi-dimensional characterization of the mother, who is nurturing of both Elizabeth and the writers whose work she edits. I also had fun trying to guess the identities of some of the authors who pop up from time to time in the narrative. But soon I was consumed by the raw emotion of this novel, which charts the growth of Elizabeth from a lost, suicidal girl to a confident young woman who seems to have found her direction in life. It's also very much the story of young writer in the making.

As I mentioned earlier, this novel tends to have a polarizing affect on readers. The "hate it" camp find the story angst-filled, self-indulgent and too mature for a young adult audience. (I seem to recall that the paperback version was actually marketed to adults rather than teenagers.) I fall into the "love it" camp -- not just because I loved the insights into the editing profession provided by Elizabeth's mother, but also because Elizabeth is such an genuine character -- not always likable, but always achingly real. Her growing self-acceptance (as a person, as a daughter, as a writer) is well-earned, building to a quietly powerful final scene that I've never forgotten in the over twenty years since I first read this novel.

I'd be curious to hear from others who have read this book. Did you love or hate it?

Now that I've told you a bit about the novel, I'll get back to the original intent of this blog entry: presentation inscriptions from authors.

One of the secondary characters in THE YEAR IT RAINED is the mother's best friend, Dorothy Fiori, who lives across the street with her husband Sidney. Since many of the characters in this novel are based on real-life people, I assumed that the sympathetically-portrayed Dorothy Fiori was real as well. I seemed to recall reading somewhere that Charlotte Zolotow really did live near her best friend and that a temporary tiff between the two motivated Charlotte to write THE HATING BOOK, a still-in-print picture book that begins "I hate hate hated my best friend" but ends with a rapprochement between the two.

Several years ago I was in a used bookshop and saw a copy of THE YEAR IT RAINED. Although I already owned a copy, something told me to pick this one up and look inside. Written on the front endpaper was: 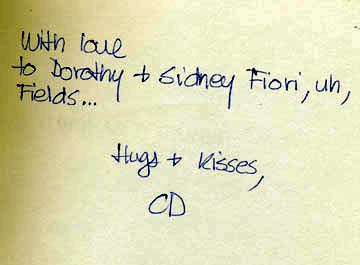 I was thrilled to know for sure that the Dorothy and Sidney in the book were indeed real people. (According to the bookseller, both had died...which is how the novel ended up for sale at his shop.)

The only other mark in the book came on page 121, in which a reference is made to "Dorothy's smell, of cigarettes and faint perfume and Jergen's lotion and hair spray...." Someone underlined the words "hair spray" and put a question mark in the margin.

I guess the real life Dorothy Fiori, uh, Dorothy FIELDS did not think she really smelled like hair spray!
Posted by Peter D. Sieruta at 7:09 PM

Now I simply have to go try to find a copy of this book to add to my Classic Children's Book Titles reference library.

Thanks again for the engaging read! Please keep 'em coming. I'll be out here...poring over and enjoying every word.

Well, guess what --- this is Crescent, the author, delighted, surprised, and pleased that THE YEAR IT RAINED is still having meaning, resonance, and provocation for readers (perspicacious ones like you, of course). I have one of these Google Alerts things, or I never would have known of your interest. Durned good sleuthing on the Fields/Fiori and CZ (she is still alive, at 92, BTW). And Isdihara, you can get the British edition of the book, in paperback, at dragonZbooks.com. I am grateful. P.S. I believe IT'S LIKE THIS, CAT was edited by my mother, and this was an era when editors and authors socialized. So the Fieldses and Neville might have met at one of the literary cocktail parties my parents threw back then (then being early 60's, late 50's).

isidhara: I hope you enjoy the book as much as I did. Thanks for your very kind word about my blog!

cd: I'm thrilled you found my comments about THE YEAR IT RAINED and I just want to reiterate how meaningful your novel has been to my life. I'm not the only one. Almost as soon as I posted the entry on your book, an editor at a major publishing house sent me an e-mail saying, "I love that book!"

Thanks for your inights on IT'S LIKE THIS, CAT -- and all best wishes to your brilliant mother (as well as brilliant you.)

P.S. Love your cookbooks. Your cornbread made in an iron skillet is a family favorite.