Moore Books from My Shelves

She was a pioneering figure in the world of children’s books.

She ran the first specially-built children’s library room in the nation at Brooklyn’s Pratt Institute. She served as the superintendent of children’s work at the New York Public Library for thirty-five years, introducing principles, policies, and procedures still used today in libraries around the world. She wielded tremendous influence in children’s literature, reviewing for periodicals such as the Atlantic Monthly, serving as associate editor of the Horn Book, and publishing several volumes of criticism.

Yet nearly fifty years after her death, she is remembered not for these professional triumphs but for her biggest blunders.

Moore is the subject of a fascinating article in the July 21, 2008 issue of THE NEW YORKER, “The Lion and the Mouse : The Battle that Reshaped Children’s Literature” by Jill Lepore. You can read it online at:

Lepore's balanced portrait gives Ms. Moore plenty of credit for her achievements (instituting library story hours, giving children book-borrowing privileges, celebrating multiculturalism) while also touching on her peccadillos, which include copius use of a rubber stamp emblazoned with the words “Not recommended for purchase by expert” (hey, I want one of those!) and a bizarre relationship with her own early version of filmdom’s Chucky Doll -- a little wooden figure named Nicholas whose hands, I have read elsewhere, were crafted to hold candles that Moore would ceremoniously light on special occasions. But the main focus of the article is Moore’s condemnation of E.B. White’s STUART LITTLE.

Strangely, it was Anne Carroll Moore who originally encouraged E.B. White to attempt a children’s book, not knowing that he'd already begun writing one. And during STUART’s seven-year gestation, she unceasingly pestered the author with giddyup letters. It must have come as quite a shock -- to both White and Moore herself -- when she finally read a galley of STUART LITTLE and proclaimed, “I have never been so disappointed in a book in my life.”

Moore tried to convince editor Ursula Nordstrom to stop publication and sent a similarly-themed fourteen-page letter to White and his wife. She did her best to keep the book out of libraries and, Lepore contends, “seems to have used her influence to shut STUART LITTLE out of the Newbery Medal.”

The book nonetheless became a critical and popular success. One might think that Anne Carroll Moore would have been suitably chagrined and chastened. Yet, just a few years later, she was up to her old tricks again! E.B. White’s second children’s book, CHARLOTTE’S WEB, was that rare novel almost universally considered an instant classic, but that didn't stop Moore from complaining in the pages of the Horn Book that she found the book “hard to take from so masterful a hand.” According to Anita Silvey’s indispensible 100 BEST BOOKS FOR CHILDREN, “Many believe that Moore played a critical role in keeping the gold Newbery seal from adorning the cover.” CHARLOTTE was, at least, named a Newbery Honor to SECRET OF THE ANDES by Ann Nolan Clark. (The book's biggest secret? How did it ever win the Newbery over CHARLOTTE’S WEB?)

I actually have a couple Anne Carroll Moore books in my collection.

In 1924 she published a fantasy novel about her wooden doll, NICHOLAS : A MANHATTAN CHRISTMAS STORY. The book was named a Newbery Honor and it’s ironic to think that, if it had garnered just a few more votes and beaten TALES OF SILVER LANDS in the final talley, Moore could have claimed something that E.B. White never achieved -- the highest award in children’s books. I’m glad she didn’t get it. The book is dated and precious, with dialogue so sugary that it can cause cavities. I have to admit I’ve never actually been able to finish Moore's book. But since I do love New York (the endpapers feature maps of the city) and Christmas, I think I’ll give NICHOLAS yet another try this coming holiday season. But I plan to keep a “Not recommended for purchase by expert” rubber stamp very close at hand.

I also have a 1939 volume of Moore’s critical essays, MY ROADS : VIEWS AND REVIEWS OF CHILDREN’S BOOKS. 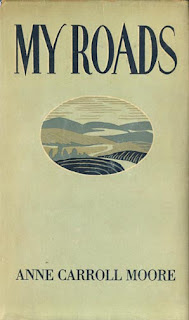 What I like best about this book is that it was personally inscribed by the author, sixty-eight years ago this very week: 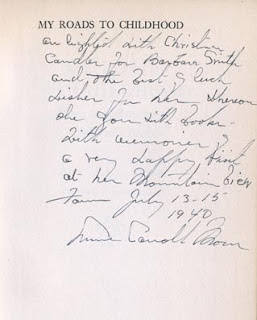 If you can’t read that, I believe it says, “MY ROADS TO CHILDHOOD are lighted with Christmas candles for Barbara Smith and the best of luck wishes for her wherever she goes with books -- with memories of a very happy visit at her Mountain View Farm July 13-15 1940. Anne Carroll Moore.”

The book's former owner also laid in a photo of Anne Carrol Moore. I love this picture because it’s not some kind of studio shot used for publicity, but an honest-to-goodness snapshot taken right on the street. In the picture, Ms. Moore doesn’t look formidable at all. In fact, she looks like someone’s no-nonsense, but kindly grandma. 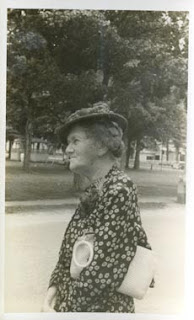 Who would ever suspect that her big ole white purse contained a loaded mousetrap and a giant economy-size can of Spidey-B-Gone Insecticide?
Posted by Peter D. Sieruta at 2:26 AM

apparently it's getting reprinted by SDSHS Press